Successful ads grow markets, do they? 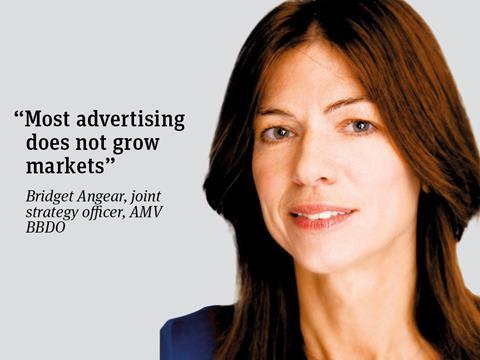 OK, I’ll admit it - people in advertising can sometimes believe our own hype. So it’s no surprise that in a survey of agency strategists, two-thirds agree that ‘most successful advertising grows markets’.

If that really is the case, this week’s announcement of a ban on advertising sugary, fatty foods to kids is probably long overdue. But what does the data say?

As part of its Advertising’s Big Questions series, the Advertising Association asked me to take a closer look. Borrowing from a classic Simon Broadbent study in the 1990s, I examined winning case studies from the IPA Effectiveness Awards and while Broadbent was careful to avoid making generalisations, having considered the evidence, I’m happy to: most advertising does not grow markets.

Market-wide effects are only reported in a small minority of winning papers (13% overall), and these effects are declining (just 8% of winners since 2008). Broadbent’s work identified the conditions where advertising and market growth were most likely to coincide. ‘A small market with very similar products’ - for example Danone Activia growing yoghurts and chilled desserts by giving women a positive ‘reason to eat’, and Corsodyl growing the medicated mouthwash market with a strong message on gum disease. And ‘markets with a single dominant brand’ where the likes of Bisto and New York Bakery Co had to grow overall penetration to achieve targets.

I would add that NPD is almost a prerequisite. And perhaps that explains why most advertising seems not to grow market size - the perfect storm of successful innovation and the right market conditions is actually quite rare. Also, when people buy more of one thing, they likely buy less of another. Most of our recent cases grew markets at the ‘subsector’ level. But did Corsodyl grow medicated mouthwash at the expense of ‘regular’ mouthwash?

I conclude that advertising can grow markets, but in the vast majority of cases, it doesn’t. Instead, it rearranges brand or ‘subsector’ share. The new food advertising rules are seen as a step in the right direction. But we shouldn’t expect them to affect the market itself.