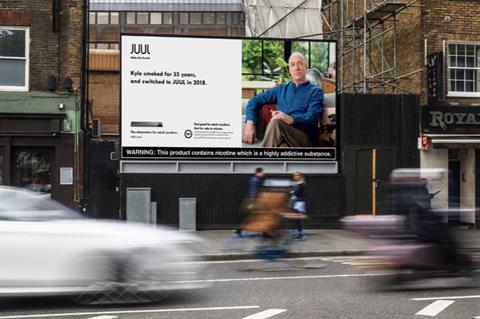 The campaign will run for 12 weeks from 1 July

Vaping giant Juul is launching its first UK marketing campaign, Make the Switch, featuring testimonials from ex-smokers who have made the switch to the US brand.

The campaign will run for 12 weeks from 1 July across 10 cities known for having a high smoking rate.

The campaign features testimonials from five ex-smokers aged 30 or over, each of whom had struggled to switch from combustible cigarettes before trying Juul.

The ads will not appear within 200 metres of a school, while digital billboards will be switched off at key times of the day, Juul said, to restrict potential visibility to young people.

“The ex-smokers featured in our testimonial campaign share their personal stories and the role that Juul has played in helping them transition away from combustible cigarettes,” said Juul Labs UK MD Dan Thomson. “Key reasons for switching included more social inclusion, no lingering smell and financial benefits, which I am convinced will resonate with a high number of adult smokers.

“As someone who smoked for 20 years and tried to give up on numerous occasions, only managing to switch using Juul, I am incredibly moved by this campaign and excited about the potential it offers to inspire large numbers of the UK’s 7.4 million adult smokers to follow their lead and make the switch.”