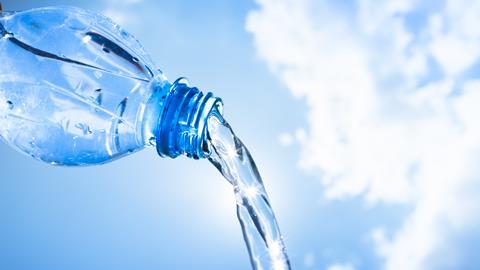 Consumers are full of opinions on bottled water. From sustainability to cost and mineral content, everyone has something to say. So what are the major factors influencing shopper choices? And just how loyal are they to the right brands? 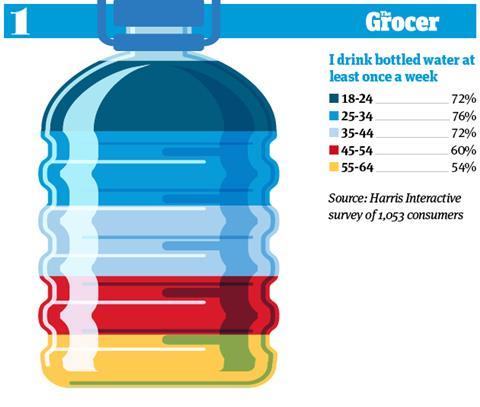 Generation Sensible is living up to its name. Not only are younger consumers cutting back on alcohol, but they are also staying hydrated in the process.

“Younger consumers seek not only the benefits of hydration on the go, but demand more in terms of purity, ingredients and functionality,” says the brand’s founder Jean Valvis.

2. But there is no variation in tap water consumption 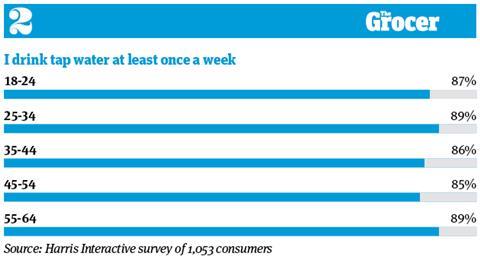 Younger consumers may be leading the way in bottled water, but there is little generational difference when it comes to tap water consumption. Across all age groups, just under nine in 10 consumers drink tap water at least once a week.

So it seems bottled water isn’t acting as a replacement for tap water. Indeed, 25 to 34-year-olds – the age group with the highest level of bottled water consumption – also emerged as frequent consumers of tap water. Seven in 10 will drink tap water every day. The only demographic with slightly more frequent consumption is the 55 to 64-year-old age group, of which 74% will drink from the tap daily.

Location accounts for the main variation in tap water consumption. The most frequent consumers are in the east of England, where 75% will drink tap water every day. This contrasts with the Midlands, where only 65% do the same. 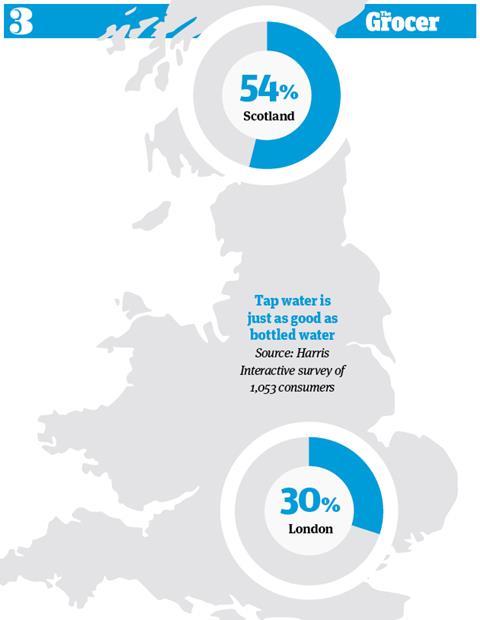 Tap water quality varies by region. So it stands to reason that perceptions of tap water vary too.

In Scotland, where tap water quality is among the highest in the world, perceptions are unsurprisingly high. Nearly half see it as being just as good as bottled water.

That number falls sharply in London, where hard water is prevalent. There, just three in 10 believe tap water can compare with the bottled stuff.

And 31% of Londoners say they worry about what tap water contains, compared with just 20% of consumers north of the border.

Which may well explain why Londoners drink so much bottled water. Still, even in Scotland, 74% drink it at least every week.

4. A third are worried about the nitrate content of tap water

Nitrates are a growing concern in the UK. So much so that the government has set out a strategy to reduce nitrate pollution in drinking water, which involves regular monitoring.

Still that does vary slightly by region. Over half of Londoners said they were worried to some extent about the nitrate content in tap water, compared with just 22% in Scotland.

Aqua Carpatica’s Valvis can only see that awareness growing in future. “Consumers have become far more informed of what comes out of the tap in their region,” he says.

5. Minerals matter to nearly half of bottled water shoppers 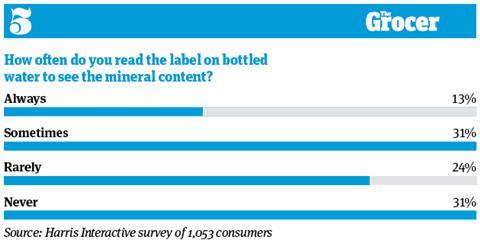 Bottled water brands tend to trade heavily on their mineral content. But is that really a selling point for consumers?

Our survey suggests there is a split. A third say they never check the label for mineral content. However, that still leaves 44% who will either always or sometimes look 0ut for the minerals in their bottled water.

Interestingly, this awareness is higher among younger shoppers. Over half of 18 to 24-year olds either always or sometimes look at the mineral content of their water. That habit is replicated by just 32% of the 55 to 64-year-old age group.

This shows the way the market is going, says Aqua Carpatica’s Valvis. “There is an ever-increasing focus on a healthy and active lifestyle, which will be reflected in savvier consumers that will demand that brands live up to redefined standards and adopt the ones that deliver,” he says.

6. But price is the main factor influencing water purchases 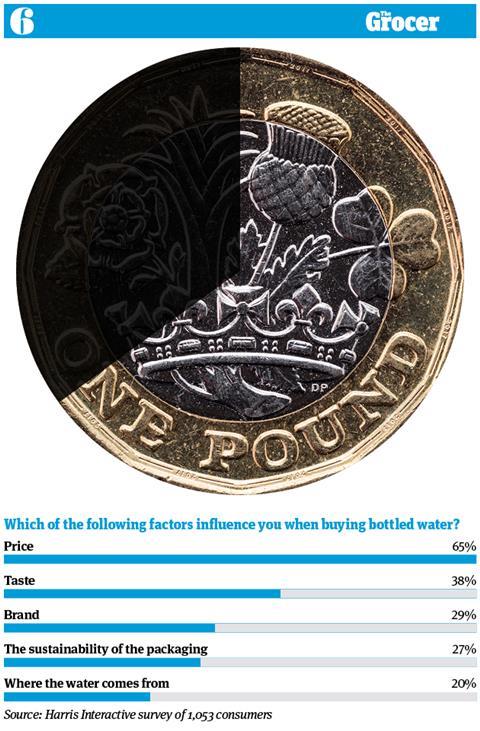 Consumers have a clear priority when it comes to choosing bottled water: how much it costs.

Yes, taste is important to nearly four in 10 shoppers. And brand is important to three in 10. But way out ahead is price, named by 65% as an influencing factor. That was the most important attribute to all demographics included in our research.

Still, there was some variation. Younger consumers, for example, are less concerned about cost. Price was an important factor to 60% of 18 to 24-year-olds, versus 76% of 55 to 64-year-olds.

Meanwhile, older consumers are more concerned about taste. A sizeable 41% of 55 to 64-year-olds named it as an influencing factor, compared to 33% of 18 to 24-year-olds.

There were plenty of geographical differences, too. The most cost-conscious shoppers were in Scotland and the south west, where 72% said they were influenced by price. Only 57% of Londoners said the same.

Plus, there were huge regional variations in the importance of taste. Nearly half of respondents in the north east said taste was an influencing factor, compared with 26% in the east of England. And Wales emerged as the most brand-conscious of all regions, as 37% factored that into their choice.

7. Younger consumers are more likely to be loyal to a bottled water brand 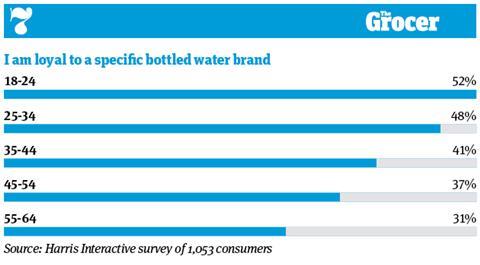 This figure demonstrates the power of younger shoppers in the bottled water market. Not only are they more frequent consumers of bottled water, but they are also more brand loyal than older shoppers.

More than half of 18 to 24-year-olds said they were either very or quite loyal to a specific water brand, compared with just three in 10 55 to 64-year olds. And 37% of this older age group said they were not loyal at all to a brand.

There was also something of a gender split in brand loyalty. Nearly half of men described themselves as either very or quite loyal, while only 35% of women said the same.

Generally, there wasn’t much variation in loyalty across the regions. The only outlier was London, which emerged as far more brand-conscious than the rest of the country. A whopping 58% of the capital’s residents are either very or quite loyal.

8. Women are more concerned about the sustainability of bottled water 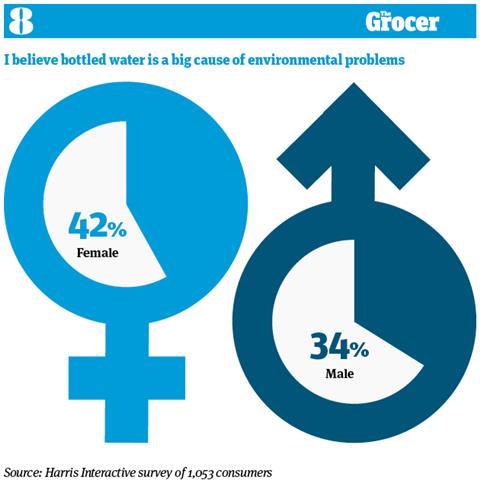 Sustainability is a hot issue across the board. And the throwaway nature of plastic water bottles has been a particular focus of the environmental debate. So it’s little wonder that 38% of consumers described bottled water as a big cause of environmental problems.

However, there were some differences in opinion across the demographics. While more than four in 10 women saw bottled water as a significant problem for the environment, only a third of men agreed.

9. Nearly half of consumers struggle to find recycling facilities on the go 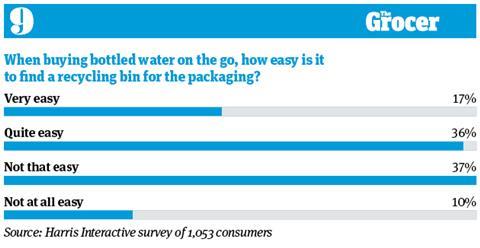 It’s not just down to bottled water brands to solve the sustainability issue. Nearly half of consumers find it either not that easy or not at all easy to find recycling facilities on the go. And if they can’t find a recycling bin, it’s likely these bottles will end up in landfill.

“Brands have already embarked on the mission of exploring environmentally friendly packaging alternatives but the circle will not be complete without the government stepping in to offer recycling facilities, both collection points and recycling plants,” says Valvis of Aqua Carpatica.

10. Glass is seen as the most sustainable material 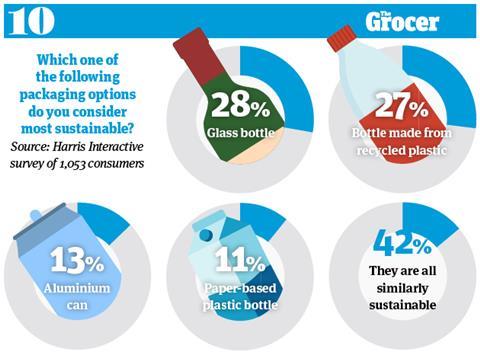 Debate has raged over the most sustainable form of packaging for bottled water. As yet, no one has agreed on the ideal solution.

It seems consumers aren’t that clear on the answer, either. Our poll reveals support for a wide range of solutions –from aluminium cans to paper-based cartons.

However, a glass bottle was deemed the most environmentally friendly material by 28% of consumers, making it the most popular choice. That was closely followed by bottles made from recycled plastic.

That opinion varies widely by age group, though. Older consumers are more likely to support the use of glass bottles. Nearly four in 10 of the 55 to 64-year-old age group agreed they were the most sustainable solution, compared with 19% of 25 to 34-year-olds.

The latter age group was more likely to be a fan of aluminium cans. It was deemed the most sustainable solution by 17% of that demographic, an opinion shared by only 7% of 55 to 64-year-olds.

Finally, there were some differences by region. In Scotland, a substantial 38% of respondents saw recycled plastic as the most environmentally friendly way to consume bottled water. However, in the north east, 36% voiced support for the glass bottle.