John Lewis products to be added to 250 Waitrose stores 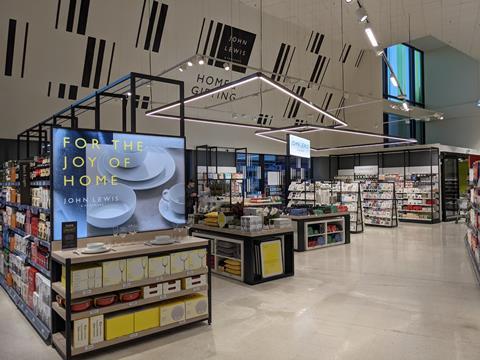 John Lewis general merchandise items will be added to 250 Waitrose stores by the autumn.

The retailer plans to add John Lewis products to its entire 331-strong store estate over the next two years as part of its push to bring the brands together.

The range includes categories such as gifting, homeware and cookware. The lines will be integrated around the store and displayed alongside relevant Waitrose products.

The number of products available differs from branch to branch and is tailored to its size and local customers’ preferences.

The rollout started at Waitrose in Lincoln at the begining of November 2019. The pilot store has more than 1,600 John Lewis products placed in a dedicated section. By the end of the same month, a 750-strong range was added to its Lymington, Hampshire branch, and the concept has been trialled at Waitose in Horley and Godalming, both in Surrey, with over 500 items in the GM aisle since the begining of 2021.

The Lincoln store also features a dedicated ‘Partnership service desk’ where shoppers can book free and paid-for events, pick up click & collect orders and collect Waitrose ‘Entertaining’ orders, while the other branches use their welcome desks.

GM sales at the five trial stores have surged by an average of 80% year on year since the John Lewis SKUs were added.

The move is part of the John Lewis Partnership’s Better Together initiative, which kicked off with its Waitrose Christmas hampers being stocked in John Lewis branches and John Lewis Christmas trees stocked in 300 Waitrose supermarkets last Christmas. The scheme has also brought a radical shake-up of the retailer’s management structure, with John Lewis and Waitrose managed and operated as one business by a single executive team.

“We are testing several formats to better understand exactly what works best for our customers when it comes to a dedicated John Lewis space in Waitrose stores,” a John Lewis Partnership spokesman told The Grocer. “We’ve chosen a variety of different locations so we can test how the range lends itself to different shopping missions. The range is designed to give shoppers more convenient access to the products and services of the John Lewis Partnership as part of our plans to bring the two brands closer together.”