Wholesalers and retailers must unite to fight illicit traders 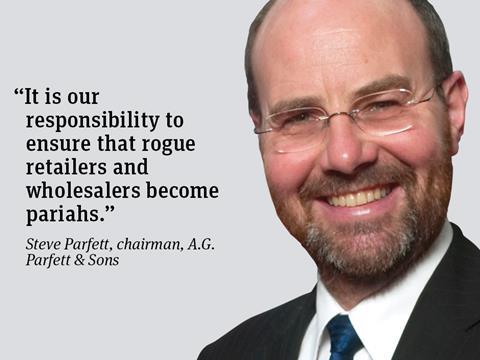 Wholesalers are protective of their relationships with their retail customers for obvious reasons - they depend on their business. This interdependability is far stronger than that between retailers and customers, with wholesalers constantly trying to remain low-cost while adding value. In turn, many retailers see their wholesaler as an essential voice in their relationship with suppliers, government and the press.

With this in mind, a breakdown in the relationship is not something undertaken lightly, but I strongly believe there are times when it is necessary. All businesses suffer from criminal activity and that suffered by both wholesalers and retailers from the prevalence of both illicit and duty-avoided alcohol and tobacco is extremely serious. Retailers who actively and knowingly trade in these goods are doing the sector a massive disservice and deserve to suffer the consequences. In my view, the legal sanctions should be severe. In addition, the authorities should be much more active in disrupting such retailers by removing licences from them on conviction for involvement in illicit alcohol or tobacco.

Having said what the authorities should do, then it is important that we, whether as suppliers or wholesalers, are equally robust. I am pleased that there are increasing instances of the tobacco companies removing cigarette gantries from stores and equally pleased that most wholesalers are removing stores from their fascia groups on conviction. James Hall of Bestway has said we should go further and close our trading relationships with any retailer convicted of such activity, and I completely agree.

While we hope alcohol registration for wholesalers will contribute to a decline in alcohol fraud, tobacco fraud is a different matter. The HMRC 2014-15 cigarette tax gap estimate puts the lower limit of losses at 5%, the higher at 14% and the central estimate at 10%. As a business at the sharp end in these matters, I’m afraid I consider these estimates ludicrous. Discard surveys have consistently shown an illicit share of about 25% for many years and we wholesalers see a problem getting significantly worse, not better. I strongly believe the combined share of business for duty-avoided and counterfeit cigarettes is at least 33% and this is backed up by the recent Mitchla marketing survey, which shows 29% of smokers now buy their tobacco from “non-shop sources”. It seems likely to me that among this 29% will be some of the highest consumers.

Damage to legitimate trade is huge and we need more from government. In turn it is our responsibility to ensure rogue retailers (and indeed wholesalers) become pariahs.