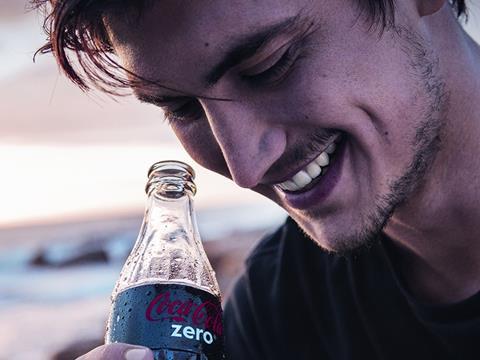 Never mind the ads’ dodgy maths (zero plus one will never make 10), Coke Zero has been Britain’s Biggest Grocery Brands’ hero of the past year.

“Zero is really exploding,” says Nick Canney, Coca-Cola Enterprises VP for sales. “Zero is now worth £86.5m; it achieved growth of 22.1% in 2013, as well as significantly improving penetration, with over one million households added.”

Impressive stuff. Zero now accounts for 7.3% of Coke’s total sales - up from 6.1% in 2012 - and the variant has delivered almost half of grocery’s only billion-pound-plus brand’s recent £34.3m growth.

The adverse press sugary drinks have received lately makes it no surprise that a sugar-free version of full-fat Coke is flying.

But one could argue that Coke has been caught napping; Pepsi Max, Zero’s closest rival in terms of target drinkers, is worth twice as much, after all.

Zero is looking to catch up. “We’re really backing it now,” says Canney, who contests any suggestion Coke has been slow to realise the opportunity, claiming Zero and Diet Coke combined now make up 46% of the brand’s total sales.

However, he does admit that Zero is aiming for a drinker who’s never been a priority for Diet Coke: “We launched Diet Coke 30 years ago - we’ve been really active in the zero-calorie offer. The Diet Coke hunk clearly suggests it’s a more female-orientated offer. Coke Zero is perhaps more male and younger.”

If Zero’s £15m growth isn’t enough to impress on its own, the fact it’s done it without detracting from the core variants certainly should be. Convincing punters to share the fizz with their nearest and dearest has been key. In April the Share a Coke campaign - in which Coke’s logo was replaced with some of the UK’s most popular first names on 500ml and 375ml PET bottles - kicked off. “It was a really innovative campaign that drove our impulse business,” says Canney.

The development of smaller bottles and cans that generally fetch a higher price per litre than conventional formats hasn’t been all smooth sailing, however. In February CCE said it was replacing its two-litre bottle with the 1.75-litre contour bottle in all channels, angering some indies in the c-store sector, where the format was launched exclusively last year. “Has CCE’s strategy to help independents completely changed after only a year?” fumed one.

Canney points out that CCE’s largest sales force serves c-stores and adds that the rollout of a new springloaded chiller system aimed at improving product visibility is proof of how Coke continues to back convenience retailers.

CCE hopes its activity for the World Cup, of which Coke is a major sponsor, will help sweeten retailers large and small this summer. “In the previous World Cup, soft drinks outperformed total food, growing 6.2% versus 4%, so we have high hopes for 2014,” says Canney.