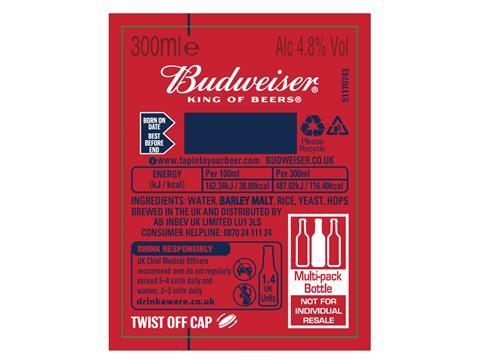 AB InBev UK has announced the start of its rollout of nutritional information across Budweiser and Beck’s next week – nine months after it first unveiled its plan to clearly display calories on all UK packs.

The new labels, revealed exclusively to The Grocer, will initially be rolled out across the 15 million bottles and cans of Budweiser and the three million packs of Beck’s brewed on average each week in the UK. This would be followed by a rollout across Stella Artois in mid-2017, AB InBev told The Grocer.

Calorie info will be given both per 100ml and by portion size on individual bottles. In multipacks, secondary packaging will include the ‘big seven’ nutritional statistics: energy, fat, saturated fat, carbohydrates, sugar, protein and salt.

“We believe providing beer fans with access to information, as well as a wide portfolio of options, from low or no alcohol beers to premium lagers, will help them make well-informed and smart choices about what and how they drink.”

The new packaging for Bud and Beck’s follows the pledge made by AB InBev in January to provide consumers with full ingredient and nutritional information for 80% of its European volumes by the end of 2017, with all products – including those acquired as part of its SAB Miller deal – covered by the end of the following year.