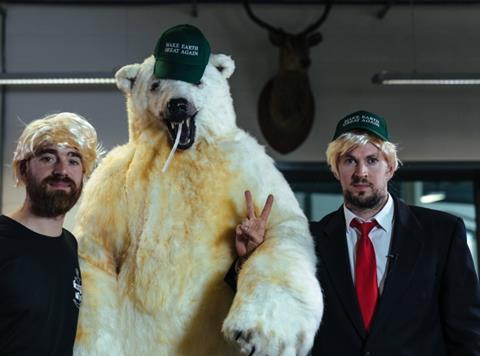 BrewDog has taken a swipe at Donald Trump with a new brew inspired by the US withdrawal from the Paris Accord.

The 7.5% abv ‘protest beer’, called Make Earth Great Again, is a saison-style brew made with ingredients from regions most affected by global warming - including water from melting Arctic ice caps and Arctic cloudberries. It will be served from a polar bear beer font at BrewDog’s Shoreditch bar, and will retail via the brewer’s online shop (rsp: £6.30/660ml).

The brand has partnered with climate change charity 10:10, with all proceeds from Make Earth Great Again to go towards funding its projects.

The move was “a rection to declining interest from notable world leaders to the biggest issues facing our planet and civilisation”, said BrewDog founder James Watt. ”We decided to make a statement and brew a beer that could have a direct, positive impact on climate change.”

The beer’s bottle reads: “This beer is as bitter as a world ignoring climate change” and warns it “may contain traces of satire”. BrewDog said it had sent a case of bottles to the White House.

It’s not the first time BrewDog has mocked the incumbent president. In 2015, James Watt wrote penned a seething open letter to the tycoon-turned-politician, sardonically promising him two free shares in its Equity for Punks programme if he agreed to stand down from the presidential race.

Last week, the brewer announced a fifth round of Equity for Punks crowdfunding, with an initial target of £10m to fund its ongoing global expansion. It will run until 15 January, with shared priced at £23.75 each and sold in pairs. Since 2009, the company has raised £41m from 57,000 investors, plus an extra £10 raised via a Crowdcube bond issue.