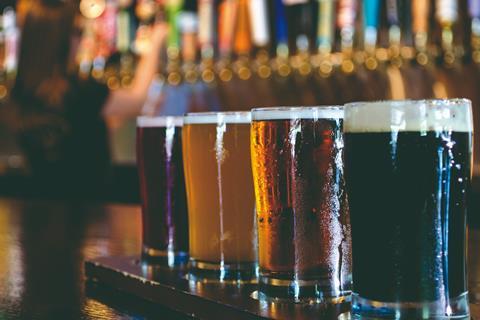 Despite the news, the Wine & Spirit Trade Association said it had received no clarification on whether alcohol production workers were now classified as key workers

Off-licences and specialist booze retailers have been told they may stay open during lockdown – but swathes have shut their doors regardless.

The government this week updated its list of premises that are allowed to remain open to include off-licences and licenced shops selling alcohol, including those within breweries, deeming them essential retailers.

“[The govenment] have not given us a definitive view, however they have accepted that we will be advising our members - with businesses in England and Wales, and in Scotland - that they can remain open, as long as all staff adhere to social distancing rules,” said Wine & Spirit Trade Association CEO Miles Beale.

“We take further comfort from the fact that Michael Gove has said publicly that online trade in non-essential items can continue. We are therefore advising our members who trade online that if they wish to continue to offer online sales then, provided staff are able to work safely, then activity can continue.”

Yet despite the news, many booze specialists have said they will not be opening, relying instead on delivery to keep sales ticking over.

Majestic Wine, for instance, has announced it will close its stores – though it stressed it would continue to deliver wine throughout the crisis.

“We appreciate this may be disappointing to some customers, but strongly believe it is the right thing to do,” it said, adding by keeping deliveries running it could ”help to alleviate strain on supermarket supply chains so they can prioritise foods and medicine”.

The Whisky Exchange, too, said it would not open any of its shops. “None of the staff are able to get to work without using public transport, which will therefore put them at risk and we do not wish to put anyone in danger or place additional pressure on our public transport network,” a spokeswoman said.

The past few weeks have seen numerous craft brewers convert their taprooms to retail outlets as the crisis mounted. But many of them are closing too.

“We cut off retail from our site late last week and very early this week,” said Cloudwater Brew Co MD Paul Jones. ”The position that we’re in – and I would urge all business owners to reflect on this – is we do not want to be a reason for people to leave home.

“We can conduct our business online and I believe that is good practice.”

Suppliers big and small are still producing, but at the time of writing there was some confusion as to whether production staff in breweries and distilleries were now considered key workers by the government. Neither the Wine & Spirit Trade Association nor the Society of Independent Brewers said they had received clarification.

Trade bodies have also expressed frustration over the government’s decision not to cancel alcohol duty, payments of which were due this week.

This placed businesses at critical risk, regardless of other moves, said SIBA head of public affairs and policy Barry Watts.

“Some brewers have had large amounts coming out of their accounts today, even though they’ve asked the government to cancel their direct debits. This is going to do real damage – many needed that for their cashflow,” he told The Grocer.

Campaign for Real Ale chairman Nik Antona added: “This could have meant the difference between many hundreds of independent breweries standing a chance of surviving this crisis, or closing their operations permanently and never reopening.”

The WSTA’s Beale said it was “a bitter blow” and meant “many businesses will be faced with the extremely hard decision of whether to pay tax bills or pay staff”.

“We had hoped that government would honour their vow to do everything in their power to help, but sadly it seems that in this case government action does not support its rhetoric.”