Gordon's surges by £100m as Brits splash out on Pink Gin 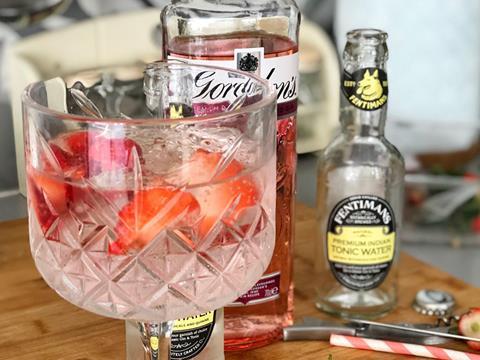 Brits have splashed out an extra £100m on Gordon’s over the past year, with sales boosted by huge demand for the Diageo-owned brand’s new Pink Gin.

The launch had performed “at the top end of our expectations” said Diageo general manager for GB, Ireland & France Charles Ireland.

“We’ve got some amazing talent in our innovation group. They came to us and said pink was going to be a big deal, so we tried to get behind it really fast and go large with it. We’re delighted with it and we think it’s doing great work for the market overall and for retailers.”

Pink gin had “been the success story of the year in spirits”, said Kantar analyst Laura Christen, and had capitalised on the ‘spritz’ trend which grew hand-in-hand with prosecco’s recent good fortune. She credited Gordon’s Pink with “starting the revolution which seems to have taken hold across several alcohol categories”.

Broader flavoured gins have also racked up serious sales, with approximately 1.6 million additional shoppers picking up a bottle of flavoured gin from the likes of Warner Edwards, Edinburgh Gin and Tanqueray compared with last year.