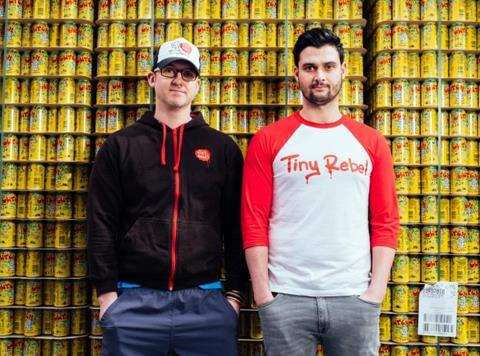 Tiny Rebel has blasted yesterday’s Portman Group ruling on the craft brewery’s can design, claiming it set a worrying precedent for the UK’s independent brewers.

Tiny Rebel unveiled new packaging this morning, with the brand’s logo moved to the back of the 330ml can.

‘We communicated regularly with the Portman Group over the past five months and actually found them to be an alright [sic] bunch,’ wrote Tiny Rebel MD Bradley Cummings in a post on the brewer’s website today (13 December). However, he added: ‘We obviously disagree with the panel’s decision, but have to do what they say because they have us over a barrel commercially.’

The decision had cost the brewery around £30k in legal costs, redesigning the can and loss of stock, Cummings claimed.

That there were no independent brewers counted among the Portman Group’s funders or consultants or on the panel that handed down the decision meant its advice came from ‘a massively limited cross-section of society’, the Tiny Rebel boss argued.

The watchdog’s actions forced companies to be ‘over-cautious in design, which is inherently limiting. Instead of designing something for what consumers would like, companies have to design bearing what the most prudish among us wouldn’t like’, he added.

‘In a country of nearly 66 million people, just one complaint has forced us to change. It’s taken five months of work, nearly £30,000 in costs, and a fair bit of stress, for a tiny change.’

A spokesman for the Portman Group stressed many regulators, including the ASA and Ofcom, operated on a single complaint basis, with complainants receiving automatic anonymity - unless they were associated with the industry.

‘You won’t see us going after the Portman Group or the Independent Complaints Panel to get our name out there or make a fuss out of it,’ Cummings wrote. ‘We won’t be screaming “nanny state” or “Tiny Rebel is being oppressed”, or anything like that. We’d actually just like to get back to making beer and having fun while we do it.’

Portman Group chief executive John Timothy said the watchdog “welcomed Tiny Rebel’s confirmation that they will implement the agreed changes to their Cwtch can to comply with the code, following the Independent Complaints Panel’s ruling”.