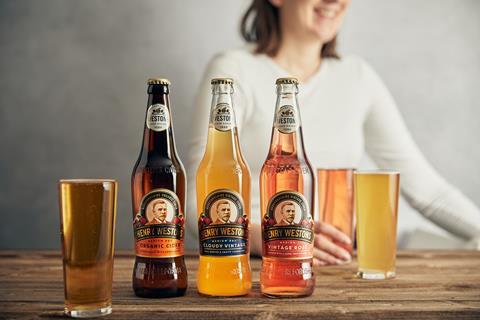 The off-trade cider category faces a “positive outlook” despite the current coronavirus pandemic, according to cider maker Westons.

Amidst the Covid-19 pandemic, Westons had ramped up production of lines including Stowford Press, Henry Westons, Old Rosie, Rosie’s Pig and Mortimer’s Orchard “as a matter of urgency” so that it would “be ready to fulfil increased demand among the off-trade” the brand said.

It has diverted some of its on-trade staff to its off-trade operations, and has sent staff to help stack shelves in supermarkets. Westons was also reviewing its production schedule as it had seen “a significant uplift in demand” in the off-trade, it said.

The brand would “continue to support the on-trade” and “ensure that we can satisfy whatever on-trade need there is”, which included working with pubs who were offering a takeaway service. It would also ensure it was “well stocked with on-trade products for when restrictions start to ease”.

Westons head of business development Darryl Hinksman said the business would “prefer to be operating under very different circumstances”, but it was “important that we continue to meet both current and anticipated future demand in light of the ever-changing market dynamics that mean cider will continue to be on the nation’s shopping lists both now and in the future”.

His comments come from Westons’ fifth annual Cider Report covering key trends for the category, including premiumisation, authenticity and craft, as well as low & no alcohol and a “continued appetite for new”.

A quiet night in, chilling out at home and enjoying with food were “primary purchasing motivations” for cider, according to the report, and these occasions were set to “totally change in the next few months as the on-trade faces challenges”.

Rosé cider is growing in popularity – which Westons saw as a “recruitment tool” to get new drinkers into the category from other categories such as wine and pink gin, and to change fruit cider drinkers into drinkers of traditional apple cider.

Westons head of marketing Sally McKinnon noted a “really heavy influence and relationship between flavoured gin, rosé and the flavoured cider category” and that “consumers had much more movement between categories” than before. The growth had also been driven in part by the trend towards pink products, she added.