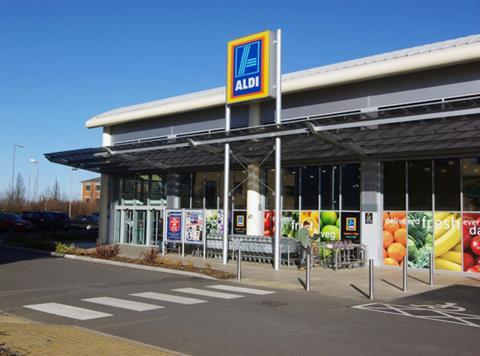 Aldi has upped the stakes in the battle over milk pricing

Aldi is the latest retailer to wade into the supermarket price war on milk, slashing the price of four pints from £1 to 95p – less than 24p a pint.

The discounter took out full-page newspaper ads today to raise awareness of the price point and said it had cut its prices in response to moves by other supermarkets.

The current round of cuts was kicked off by Tesco on 3 March, when it lowered the price of four pints to £1 – the same price as Asda. Sainsbury’s, The Co-op and Waitrose followed with cuts of their own, before Morrisons slashed prices to 24p a pint. The new Aldi price marginally undercuts Morrisons’ price.

In a statement, Aldi said suppliers would not be impacted by the price cut.

“Following reductions in milk retail prices at other supermarkets, we have lowered our prices to continue to provide customers with value at the checkout,” a spokeswoman said.

“Aldi remains committed to responsible sourcing and our price reductions do not alter the costs we pay to suppliers. Aldi works hard to provide both UK dairy farmers and our shoppers with a fair deal – and this involves continuously reviewing pricing to ensure it is fair, competitive and transparent.

“In 2013 Aldi increased the price it pays per litre of milk to help support dairy farmers without passing on any of the increased cost to shoppers. The price the farmer receives is clear and transparent as it is stated in Aldi’s supply contract with its two milk processors.”

The news will likely be welcomed by consumers. A survey in this week’s issue of The Grocer reveals that 60% of consumers agree that cutting the price of four pints of milk to £1 is a good thing. But farmers have raised concerns that slashing milk prices devalues it in the eyes of consumers.

Read this: How much will milk price war cost Tesco?