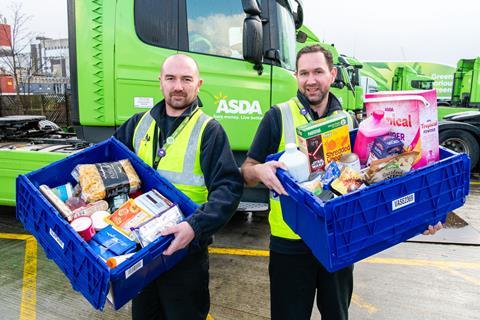 Asda buyers are sourcing hundreds of thousands of pounds worth of food on behalf of surplus food redistribution charity FareShare to help groups facing insecurity from Brexit, The Grocer can reveal.

The charity has received £1m from the Scottish government to help groups, after it raised fears that the vital work of charities faces being hit by the UK’s impending withdrawal from the EU.

FareShare has joined forces with Asda, which will be sourcing thousands of meals at cost price and delivering staple ambient and frozen food to FareShare’s warehouses, with no profit being made by Asda.

The charity stressed the food was in addition to the surplus food the retailer already donates from all its stores and distribution centres in Scotland.

In August The Grocer revealed FareShare had warned a no-deal Brexit would threaten the supply of surplus food to charities, including its own work which in 2018/19 saw almost 20,000 tonnes, or 46.5 million meals, redistributed.

It said it feared being squeezed by the disruption to retailers’ logistics operations, and possible shortages of fresh food.

By purchasing the food at cost price, FareShare said it had been able to distribute 30% more food than it otherwise would have been able to.

Already 108 additional tonnes of food have been delivered to FareShare’s four warehouses in Aberdeen, Dundee, Edinburgh and Glasgow, with many more pallets being delivered in January.

“This additional £1m was provided to help protect people and organisations across Scotland from the impact of Brexit and ensure support goes to those who are most at risk,” said Scottish government communities secretary Aileen Campbell.

“This is in addition to the £3.5m we are spending to tackle food insecurity this year. Despite the continued Brexit uncertainty we are facing, we will continue to do all we can to tackle poverty head on.”

Asda senior director for community Stephi Brett-Lee said: “Through this initiative, we are able to support the charity to ensure thousands of vulnerable people in communities across Scotland don’t go hungry this winter, We know our customers and colleagues are passionate about us tackling food insecurity and this scheme is helping us to do that right in the heart of our local communities.”

Gillian Kynoch, head of FareShare in Scotland added: “Working closely with our partner Asda, we will be able to reach more low income and vulnerable people through our network of frontline organisations - such as food banks, community centres and children’s after-school clubs.”