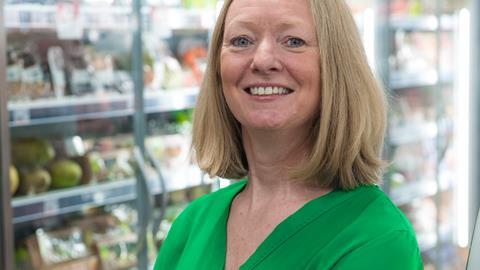 Looking back over the last year, Spar MD Louise Hoste speaks about her pride at the symbol group’s response to the Covid crisis

As the UK makes its first tentative steps out of the latest coronavirus lockdown, Spar MD Louise Hoste looks back on the way the business has navigated the choppy pandemic waters so far and is clearly proud of the work it has done.

With no “playbook” to guide the business through, Hoste says it has been a matter of “rewriting things as the business moved forward”.

The first priority was the safety of staff and making sure they could work effectively out of the office. After that it was also ensuring the five Spar wholesalers were kept informed of everything going on via weekly Teams calls.

Hoste is glad of the seven months she enjoyed as MD before the pandemic hit, using the time to fully immerse herself in the Spar way and get to know its wholesalers, retailers and suppliers. However, she says communication has been as good, if not better, since last March.

“I gave myself a challenge during my first three months, that I would visit each of the RDCs and spend time in their stores. I also visited International including a trip to Ireland on the 18 December. So I felt I got a good understanding of it,” Hoste explains.

But in the first weeks of lockdown, it became quickly apparent that the role of convenience operators and the services they delivered had changed.

Basket sizes increased and the frequency of shopping trips lessened as customers stayed home. Ironically Sunday trading, which the convenience sector has long held up as one of its few competitive advantages over the large supermarkets, dropped right down, with Thursday and Fridays becoming the busier days as consumers looked to “actively spread their shopping habits”.

“People are now using convenience for an everyday shop, so that has meant we’ve had a big growth in fresh and bigger pack sizes of ambient,” she says. “Lockdown has also impacted the growth of alcohol and cigarettes. But the flip of that is without people travelling, you’ve got the challenge of sandwiches, lunchtime meal deals and confectionery.

“That lack of movement has created its own dynamics, but I do think these categories will come back once people start moving again.”

The panic-buying that saw supermarket shelves stripped bare in March began having repercussions in terms of availability in the convenience sector. Hoste emerged as a vociferous campaigning voice for the wholesale and convenience sectors. She joined the Federation of Wholesale Distributors in calling on suppliers to allocate stock fairly.

Suppliers were distributing products based on forecasting algorithms that were created by previous purchasing history, which Hoste says just wasn’t relevant any more.

This meant Spar was having to strip off any kind of “normal parameters”, such as supplementing convenience pack sizes for the same packs as supermarkets. Because it wasn’t about tradition any more. It was about need.

“At the end of the day, what the country needed at that point was a secure supply of food,” Hoste says. “So working closely with suppliers and using reduced SKU variants, we could provide a service for the country.”

This week will see the last meeting of the government’s Food Resilience Industry Forum (FRIF) or ‘war room’ as it has been dubbed. Hoste is full of praise for the work it did and how it brought key players in food and drink closer together.

“I think the FRIF call has been paramount,” she says. “That connectivity from manufacturer, right the way through to retailer distributor, has really helped the industry, and making sure that with ACS, BRC, Defra, and with Scottish counterparts, convenience was getting its fair share.”

While Hoste was instrumental in unlocking supply at the highest level, she also speaks highly about the entrepreneurial spirit of Spar retailers and their approach to problem solving.

They “threw their innovation” at bringing products in and began sourcing their stock elsewhere to alleviate knots in the supply chain.

“Our independents know their local market, they know what their customers want, and they can tune and adapt their offer far more locally than a big retailer,” says Hoste.

But availability wasn’t the only stumbling block for stores. The location of shops was creating “a tale of two halves”, she says.

While community neighbourhood stores saw spikes in traffic, the pandemic left town centres deserted, meaning convenience stores reliant on that trade were suffering huge losses. Some had to close.

“We have stores that are city centre-based, in universities, and motorway services that have struggled, and with some still shut,” says Hoste. “And it’s tough because they sit in among their peers who are trading really well, and it is purely their location that has driven that.

She has also been keen to support retailers as they face a rising tide of crime.

According to Usdaw, nearly nine in 10 shopworkers were abused last year, with 88% of 2,729 workers experiencing verbal abuse. The introduction of mask regulations created another flashpoint.

“Now, we are in tough times. And in tough times, crime does rise,” says Hoste. “And we’re seeing that, like with the whole scenario of face masks, and how it can create such a violence in people.”

Alongside ACS and BRC, Spar UK has campaigned to bring the agenda to the forefront and accentuate the challenge that people are managing on a day-to-day basis.

Together, they worked on training and best practices that could teach retailers how to protect themselves and colleagues.

Another key area for support Spar has been heavily involved with is backing retailers as they get on board with on-demand convenience.

Hoste says 18% of Spar’s total estate are now using their own in-house service to provide home deliveries or via apps like Snappy Shopper.

“That space for convenience in that versus a big multiple, is definitely a different offer that convenience can provide in that sector,” she adds.

“I think it has definitely accelerated our thoughts into that arena, and we will continue to work on it in terms of what does it looks like for Spar as a whole for the future.”

So where does Spar stand now? And what position does Hoste see the business when the nation eventually exits lockdown?

“I think we’re in a strong place,” says Hoste. “I think we’ve really understood more than any other time the strength of having independents in the business and making sure that we enable them to grow and support their growth.

“And in the same way, because we’ve got the international element, the mix of international and independents position us differently in the market. It’s a distinct advantage to us.”

The summer of 2021 is also set to bring lots of new levels of NPD for Spar, and a big push for own-brand development. Hoste highlights new additions to the Spar range including BBQ ranges, salads, pies, flavoured milks and new chicken ranges.

“Once we got past the first one or two months of that first lockdown, we said ’we’ve got to get back to normal’,” she adds. “Convenience historically has not had the same own-label penetration as multiples so we definitely need to be more in that space and offer the choice for the customer.”

So as disruptive as Covid-19 has been for the industry, Hoste believes Spar has only proven the relevance and competitiveness it can offer. “It has brought the wholesalers together because we were all learning from each other, and with international, we have shared the best practices between ourselves.

“I think it has consolidated us as a business and brought us closer together.”