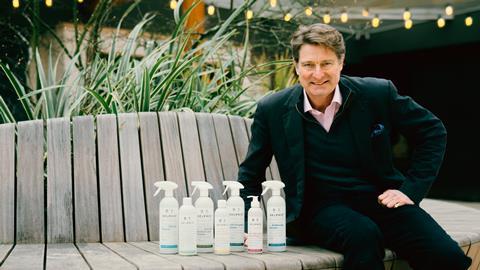 Ditching a high-paid City job to start an eco-friendly cleaning business takes guts. Especially when your wife then goes into labour with your second child. “She was swearing at me, ‘How could you have given up your job?’ So it was interesting,” he laughs.

In truth, it was the start of a “terrifying” period for Delphis Eco CEO Mark Jankovich. This was 2007, when the idea of ‘business for good’ was relatively uncharted waters. Indeed, before leaving RBS to pursue his venture, the South African-born banker “presented a business plan to the board around [RBS embracing] social value and they said no. And I thought, actually I need to go and do something that is good for me and my soul and the world.”

So Delphis Eco was born. The aim was simple: to take eco-friendly cleaning to the masses. It was a passion project for Jankovich. At the time, he had just seen “pictures of polar bears dying and plastic in the ocean” on Blue Planet I. “My logic was if I can have a tiny impact on reducing the amount of nasty chemicals going into the environment, I will have contributed positively,” he says.

Today, it’s a £5m business, with 175% revenue growth in the past year, and boasts listings in Ocado and Waitrose. But he’s hardly even started, he says, targeting £600m in sales. So how has Jankovich got this far? And how does he intend to take it to the next levels?

Best business advice I’ve ever received: If you had a magic wand, what would you do? OK, so now do it.

Career highlight: The way the team and business responded when the pandemic hit. Everybody took on a million new challenges and adapted immediately, resulting in us not disappointing a single customer and winning many more.

Career mistake: When I was 18 years old I came across Red Bull while skiing. It wasn’t available in South Africa so I wrote to them asking if I could have the distribution rights there. They wrote back saying yes, but I decided that I’d rather enjoy university. Today Red Bull is the biggest carbonated soft drink business in SA and worth billions.

Best book I have read recently: Bill Gates, How to Avoid a Climate Disaster. You can see why he’s so rich. He is so phenomenally smart.

After calming his wife down, the next challenge was to develop a formula that delivered not only on its environmental pledges, but offered the same cleaning power as the “skull and crossbones” side of the market. It started with a Google search. He found an Australian company making cleaning products out of gum tree sap. “And I thought, if you can make products out of gum tree sap, which is highly biodegradable, and super effective, surely we can do this in Britain as well?” So Jankovich found a chemist to produce his own formula.

The rest, as they say, is history. Well, not quite. The decision to focus initially on B2B (while rival Ecover was dominating supermarket shelves) was also fraught.

“Trying to convince big corporates they should be using eco-friendly cleaning products was very tough,” he admits. Facilities teams were dubious that sustainable products could get the job done. On the other hand, “I thought if I can create a product I could prove worked in the toughest, toughest environments, that could give the market confidence,” he says.

Jankovich struggles to pinpoint a single ‘tipping point’, but securing an agreement to supply Clarence House was big – and the range now holds two Royal Warrants. “When we got the thumbs up from them, that was a shot in the arm,” he says.

Supplying 900 Iceland stores was another key milestone. “Iceland set up a call centre, panicked they would get deluged by store managers saying this stuff doesn’t work,” he recalls. “They shut it down after two days because no one called.”

Then came Blue Planet II, when “the penny had dropped and phones started ringing”. Caterers were particularly receptive, says Jankovich, as they understood the impact on fishing and “the impact of pouring phosphates back into the fields”. Suddenly, eco-friendly cleaning was no longer niche.

With catering companies accounting for a large part of Delphis Eco’s clientele, that could have spelled disaster when Covid-19 forced hospitality venues to shut their doors last year. Jankovich recalls the impact in typically honest style. “My first reaction was total panic. And then I think I panicked even more after that.

“People were cancelling orders left right and centre, we had wholesalers sending products back, so it was terrifying that first weekend,” he says.

Soon, though, he realised Delphis Eco was in a stronger position than rivals. Crucially, it manufactures its products, packaged in 100% recycled plastic, in Britain. That meant it was less exposed. “We’d just taken in a massive batch of recycled plastic, we had our bottle blowing factory up and running, so we had all the raw materials,” he recalls. “Whereas other people were having stuff made overseas and couldn’t get anything into the country.”

“I knew our competitors were in trouble when some of the top hotels in London were calling us,” Jankovich recalls.

Plus, the business had also made a timely debut in retail. Delphis Eco listed on Ocado in December 2019, meaning it was around to cash in on the consumer-led frenzy for cleaning products of all shapes and sizes. Its sales on the site have grown more than 10-fold in the past year, albeit from a small base. “We were lucky to be in the right place at the right time,” says Jankovich.

Also fortuitous was its Waitrose listing this year. Jankovich had always envisaged moving into mass retail. “I met Mark Price from Waitrose in 2010 and he said, ‘We must list you’. And I went, ‘I don’t want to be listed on your shelves yet, I will knock on your door when the time is right’,” he says.

The right time turned out to be last month, when Jankovich felt Delphis Eco’s position was strong enough to take on rivals. He admits to fears about overcrowding in the market. “Year after year more of these brands started to come up and we said, ‘we need to do it sooner rather than later’,” he says. “But in fact, it’s not like that. If you have a great product with great provenance, you’ll be fine is my belief.”

With its roots in B2B, the biggest challenge is building a consumer brand. To that end, it has just kicked off a campaign with Sarah Beeny as a brand ambassador, whose credentials as a “wholesome mum of four living on a farm” made her a good fit.

But Jankovich’s ambitions go way further than that. A refillable range is set to hit supermarket shelves later this year, a move he believes will be vital: “I would be surprised if retailers are allowed to sell single-use products in five years’ time.” In terms of stockists, “the traditional wisdom says Sainsbury’s is the next one to go to”, but he also singles out the progressive work of the sustainability team at Tesco. He also wants to build its presence on the international stage. He’s made inroads in the Middle East. But he wants 1% of the household cleaning market in Europe. Which equates to £600m.

Ultimately, Jankovich says his plan for the next five years is “planet, people and profit”. He’s worried it sounds cliché – and it’s certainly not something that would have washed with RBS back in 2007. But right now, it sounds like a highly bankable concept.