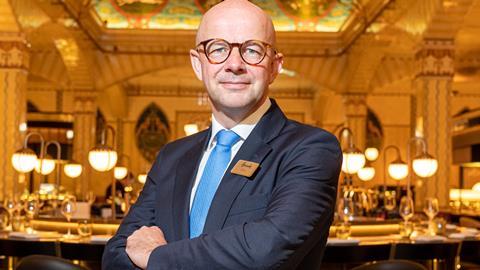 Chris Dee big interview: how Harrods is keeping up with an online world

Harrods is undergoing a transformation in a push to modernise and hold its own against online. The former Booths boss is leading it

When Chris Dee was 11 years old, he went to London for the very first time and visited Harrods. That night he dreamt of living in the dome on top of the building. Four decades on, he’s leading the luxury department store’s food and home division, from an office that overlooks the dome. “It’s been a passion as much as a career move,” he says, as we sit down for coffee in the department store’s newly opened dining hall.

Dee joined Harrods last August, 18 months after standing down as CEO of Booths. He had wanted to take the upmarket chain in a different strategic direction from the Booths family, but parted “very amicably - in fact I maintained my shareholding”.

After taking on some non-exec and advisory work, the approach from Harrods - a business he had “always had a fascination with” - was too good to turn down. “My predecessor Alex Dower had started this ‘taste revolution’, taking the best of what Harrods had always done, from a food and drink perspective, and bringing it into the modern day.”

Harrods started life as a grocery store, selling tea and groceries from a single room in the mid-1800s. Since then it has expanded into a one million sq ft store selling everything from make-up and designer clothing to luxury jewellery and electronics, and has become a must-visit destination for London tourists. But it’s the food, Dee insists, which is “at the heart of the business”.

“The food halls are on everyone’s bucket list for London, so they are very busy and there are a high proportion of tourists from across the world. It’s the one area where we have an awful lot of Harrods-branded products.”

“The food halls are on everyone’s bucket list for London”

One thing Dee wants to change is the packaging of its own-brand products, which he feels don’t do them justice. “We’ll be repackaging, rebranding and relaunching all the Harrods own-brand food products over the next two or three years.” Work on the design has started behind the scenes, with chocolate as the first category set for the new look. This will be launched with the new chocolate hall, and will be followed by tea and coffee and then Christmas.

Another major change Dee is leading is the refurbishment of Harrods’ four famous food halls, which is part of a wider £200m transformation of the Grade II listed department store.

His predecessor Dower kicked off the refurb with the roastery and bake hall, which reopened at the end of 2017. First on Dee’s list when he took over was to oversee the renovation of the fresh market hall, which opened last November. “This, for the first time, pulled all the fresh chilled elements of the food offer together into one room, which has been a great success,” he says. “We’ve managed to curate the very best of the best from across the world into one space. It may sit within the heart of a department store, but it really feels like a European market hall.”

Next was the dining hall, which opened at the end of June. “We had a lot of architectural clutter. We’ve been able to strip it right back and let the original of the room shine, including the amazing tiling designed by William James Neatby in 1902.”

The fourth and final hall to be overhauled will be chocolate. Work is due to begin at the beginning of next year, with the new hall expected to open next summer. “It will be an extraordinary room,” says Dee, and one that really “brings chocolate to life”. As well as 10 concessions - with whom deals are yet to be finalised - there will be an area where customers can watch chocolates being made. “The experience is just as important as the product. We are a brand that relies on customers coming here and having a great time.”

Dee has witnessed many changes in grocery. However, with a lot of Harrods’ custom coming from non-UK consumers, “to a certain extent the UK market doesn’t impact us in the same way as others - we’re more reliant, from a footfall perspective, on London tourism than the UK grocery market”.

“We’ve got a very high footfall and high volumes per square foot, which is very efficient.” But Harrods has had to up its game in terms of experience, to ensure it remains a popular destination. It needs to be “visceral” to allow Harrods to hold its own as online shopping changes shopping habits, says Dee.

“At the end of the day, we believe massively in bricks and mortar. It’s hugely destinational, it’s all about that visceral experience of coming into an environment which is exciting and dynamic, which offers visitors a window into this world of luxury.

“If you get it right you can still attract a huge number of people to shop with you and dine with you - the high street isn’t dead, it’s just moved around a bit.”

Potted CV: Wine merchant for two years, set up a chain of wine shops which he sold to Oddbins, joined Booths as marketing & IT director and became CEO in 2015, left Booths in 2017 and joined Harrods in 2018

Best career decision: Starting out not wanting a career

Worst career decision: Thinking I can do it alone

Best piece of advice given or received: It’s amazing what you can accomplish if you don’t care who takes credit

Favourite books: The Remains of the Day by Kazuo Ishiguro, The Rachel Papers by Martin Amis, The Versions of Us by Laura Barnett