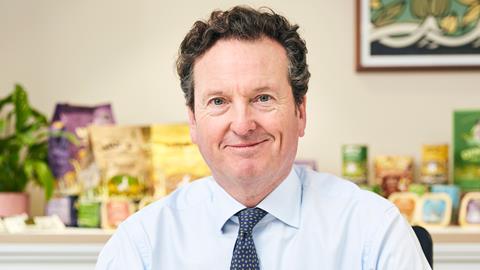 Everything this serial entrepreneur and investor touches has been turning to gold. What’s his secret?

Since David Milner quit the corporate juggernaut, he’s not put a foot wrong. In 2016, he sold crisps brand Tyrrells for £300m. Earlier this year he flogged Lily’s Kitchen to Nestlé (while keeping his job) for an estimated £100m. And on the side he’s chairing St Pierre, the brioche bakery specialist that’s growing exports at a rate of knots, and is a non-exec and investor in fast-growing DTC vegan brand Allplants.

So what’s his secret? Of course, he’s lucky he picked the grocery side. Never more so than now. “If you’re selling food for people to consume at home, apart from tech I wouldn’t be in any other part of the market.

But Milner does seem to have an uncanny knack. It’s not just about picking winners. It’s been about knowing what he wants to do with them, he says.

“I’ve always tried to keep things simple, because in my experience, most things are quite simple. When people make things complicated it’s because they’re trying to hide something or they don’t really understand it. You just need to know what needs to be done.

Similarly, “Lily’s is a lovely brand, super product but it wasn’t in all the supermarkets, didn’t deal with Amazon, it didn’t have international and it didn’t do much direct.”

Since he took over in 2018 all have been addressed. The fastest-growing has been direct. “It was always there, but it was the only part of the business going backwards. Now it’s a £10m business – helped by Covid obviously, but we were already building a better website, focusing on quicker fulfilment.”

Add to that “hugely successful” snacking innovation (“because I know about snacks and people like treating their dogs, same as they do themselves”), and it’s the UK’s fastest-growing petfood brand [Kantar y/e 6 September] with sales up 37% in its first six months under Nestlé ownership.

If Milner makes success sound simple, he’s seen how easy it is to crush it. After selling Tyrrells to Amplify the senior team was gone within months. “Suddenly the magic was no longer there. We had a super team. They saw all that as a financial synergy. I run small businesses. It’s not like a big company where it’s an oiltanker and where success happens almost regardless. It’s like a speedboat. The calibre of the team is incredibly important.

In contrast, Nestlé “really have left us to get on with it. They’re not involved in any of our business planning, our purchasing, I haven’t met them at all. I’ve had one Zoom call with my European boss in six months. There would be a synergy in merging Lily’s [into their petfood business], but they want to make sure we accelerate the growth of the brand, and not just make some savings on the sales force side or back office support – and all credit, they’re absolutely spot on. ”

Another key has been Milner’s success with exports. He learnt how exports work as head of international at Campbells. “Without wishing to sound arrogant I do think [exports] are straightforward. Don’t bother with IRI or Kantar. Don’t wait around for the government [to organise a trade trip]. Just fly to the country and look on the shelves of the supermarkets. Ask yourself: ‘Have I got something better or different?’. By and large if the answer is ‘yes’ they buyers will say yes too.”

The other trick is to use a distributor – and “highly incentivise” them to succeed. And he’s “never too proud to move to a better distributor who’s turned us down at the onset once we’re established”.

It’s exports that make the difference with valuations, he believes. “A Nestlé, a Mars, a Unilever, they don’t want national brands any more. So when you have one of these [growth] businesses you have to get it into a number of markets. In the petfood market for example, I know there’s a lot of petfood brands for sale, and you might think a £100m petfood business is more valuable, but if it’s three brands and they’re all UK-based, that’s less interesting to buyers.”

Lily’s is not the only brand Milner going great guns overseas. St Pierre, the brioche specialist (of which he’s been non-exec chairman since 2018) has also been enjoying meteoric export sales growth (it’s the no1 brioche brand in the US, with sales of more than £100m, up 60% this year and 33% in the UK).

Ironically Milner’s main contribution has been closer to home, changing the name and packaging. “I heard [co-founder] Paul [Baker] explain: it’s Carr’s but not as in Carr’s the water biscuits. It was a distraction to have to explain every time. So I brought in Big Fish to rebrand. That’s what you do [as a non-exec]. You don’t know the business. So you have perspective. You come up with what seems like clever ideas, but actually most of them are just common sense.”

The next step is better UK distribution. “We’ve only really focused on the UK in the last two years. We don’t have significant distribution. It’s in all the independents. But there’s still a lot to go after in the US too.”

Allplants is on an even steeper trajectory. A frozen vegan DTC ready meals business, sales are up 160% this year but it’s grown 150% for the past three years. “I love the brand name, I love the product. And it’s run by Jonathan Petrides, ex McKinsey and possibly the smartest guy I’ve ever met. He thinks it’s the Oatly of food and my job at some stage will be to get it into the supermarkets.”

As a non-exec it’s not always been easy for Milner, he admits. He’s naturally hands-on. When he was brought in as non-exec chairman by Lily’s Kitchen founder Henrietta Morrison five years ago, as much as he admired the “incredible job” Morrison had done, he found it hard when the ideas he suggested were ignored. “I’m used to listening and then making a decision and acting on it. But as a non-exec, you can only suggest ideas, everyone is so polite, and a month later they’ve not done it. I’m laughing now, but that was the hardest thing for me.” On the other hand, since swapping roles, Milner took the opportunity to “do all the things I had suggested in the three previous years”, he laughs, “so I hit the ground running”.

He’s not been afraid to make changes on the personnel side either, with all but two members of the board new, including the CFO, production director and heads of sales and international sales.

Now there’s Brexit, Milner is relatively phlegmatic. “All I’ve done, and this is the second time, is try and get as much stock, so we’re ready to go, as a lot of our products are made abroad. I’m more worried about the pound. My advice is don’t get bogged down, and be on your toes, waiting to see what comes your way. There’s no point having a plan, the government is negotiating, I don’t think there will be a no-deal, but they’ve got to give the impression there might be.

Above all, Milner is optimistic about the UK’s prospects. “The UK is an entrepreneurial society. We’ve got an environment that lends itself beautifully to entrepreneurship, so businesses can thrive. The more you travel, the more you realise it. That’s why, when you take your brand overseas, they admire it and like it, and buy it.”

Last meal: dozen oysters and a bottle of Krug