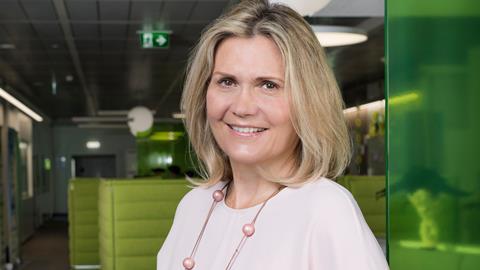 In 2011 Virginie Helias invented her ideal job, pitched it to P&G’s then-CEO, and got the job. That role was sustainability director, and today Helias is pushing P&G to make significant changes

Virginie Helias was hooked on sustainability from the moment she saw Al Gore’s film An Inconvenient Truth in 2006. It became a passion and, as a marketing director in P&G’s household division in Geneva, she led Ariel’s ‘Turn to 30°’ campaign in the same year. The campaign was not only “the single biggest and most impactful thing I could have done to reduce the footprint of the brand”, but also reversed the laundry brand’s three-year downward trend.

But Helias wanted do more. So, after some intense training and a lot of research, she flew to Cincinnati (P&G’s global HQ) to pitch a new role to P&G’s then-CEO Bob McDonald. “I wrote the job description of the ideal job, basically bridging the gap between sustainability and the business. I told the CEO there was a huge opportunity for P&G to make sustainability an integral part of our business practices, innovation, and brand-building culture. ‘Here is a job description,’ I said, ‘and by the way I want the job’.”

She got it. “He said OK, so I started there, with no expectations from anyone and no idea what I was going to do.” And the first four years in her new role as global sustainability director were tough, she admits. “It felt like I was pushing water uphill. I had many discouraging moments. People were just not getting it and not willing to change. There were moments I felt like the task was too big.”

“People were just not getting it and not willing to change. There were moments I felt like the task was too big”

What saved her was what she calls her ‘1%’. “I decided that I would not spend my energy on the sceptics. I would work with the coalition of the willing and all I needed was 1% of the leaders to come along and prove the business case. That was amazing - everything is easier because they want to do it.” And so the monumental task of “turning the P&G ship around” began.

Now, P&G’s culture is finally starting to change. A turning point was in January 2017, when it launched its Head & Shoulders bottle made from 25% recycled beach plastic at the World Economic Forum in Davos, Switzerland. “This was a statement,” she says. “We were not pretending to solve the plastic issue, but we wanted it to raise awareness, which it did. We’ve now sold more than a million bottles.”

One of her proudest moments was creating P&G’s external sustainability advisory council - her “ideal dinner party” - including Peter Bakker, CEO of the World Business Council for Sustainable Development, and KoAnn Vikoren Skrzyniarz, CEO of Sustainable Brands. The group meets twice a year for a full day, and is chaired by current P&G CEO David Taylor. “It’s a sounding board, but more than a sounding board because they really challenge us. It was great to be able to put together that team, but more important to have the entire c-suite around the table. You cannot imagine how engaged they are - they won’t take any calls, it is absolute parity for a full day.”

Another huge success for Helias was when Taylor became chairman of the Alliance to End Plastic Waste earlier this year. “People were stopping me in the corridor saying: how did that happen? Because it’s not the culture of P&G to be so visible. Taking the chairmanship on this massive, highly visible cross-sector initiative is an incredible thing.”

Helias, an executive coach on the side, is now challenging P&G’s brands to hit some pretty stretching targets. “This is a long-term, measurable, social or environmental commitment. It’s not just a purpose no one remembers.”

Pets: When I retire

Best career decision: Asking the CEO to create the job I wanted - sustainability director in 2011

Worst career decision: None, since I learnt in every one of my 12 assignments and they led me to where I am today

Best piece of advice, given or received: Be brave, not perfect

“We are going to start reporting on all this as of next year. All brands are going through workshops to define their ambitions, and we are going to see an acceleration of progress on that.”

P&G isn’t without its critics when it comes to sustainability. It was one of the big businesses targeted by the BBC’s recent documentary War on Plastic with Hugh and Anita for not making it clear there is plastic in its wipes. Helias is quick to point out that plastic itself “isn’t evil”. “What is bad is plastic waste in the environment,” says Helias. “So for wipes, which were picked up by the BBC, don’t flush them. If you flush them, the chance they go into the environment is much higher than if you put them, as described on the packaging, in the bin. At least then they will get burnt and, with energy recovery, you get beneficial use out of them.”

And emotion mustn’t get in the way of the fact. “I think we need to remember the big principle: keep plastic in circulation for as long as possible. But don’t ban it. Except when it’s not necessary.” At its HQ, P&G has also completely eliminated single-use coffee cups, and has many more sustainability goals. “They are not pledges for us, they are firm commitments. It can’t be business as usual. The only way is a new way.”

There’s still a long way to go, Helias acknowledges, but she believes the business is well-placed to up its sustainability ambitions. “Within P&G we’ve done all the low-hanging fruit, and now for the big goals - plastic, water etc. It has to be done in partnership, which is super exciting, and with innovation - which P&G is well-positioned for.”