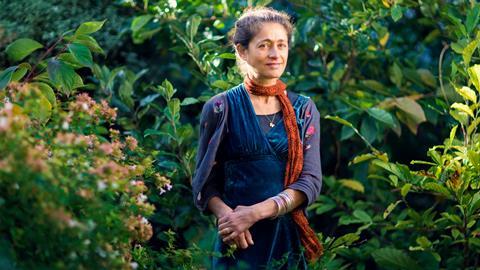 Tara Garnett has long studied food’s impact on the environment. Now she is driving dialogue and collaboration in this increasingly polarised space

Tara Garnett has not always been thanked for her work on food. In the mid-2000s, having recently set up the Food Climate Research Network (FCRN) to explore the effects of food systems on the environment, Garnett met with a senior member of the Meat and Livestock Commission, the now-defunct public body tasked with promoting meat.

“I raised the fact that at some point we need to start talking about reducing our consumption,” Garnett recalls. “And he got up and walked out. This was a one-to-one meeting so it was quite awkward… but that was the level of antagonism and hostility.”

Despite these admittedly “very awkward, very difficult” discussions with some industry bodies, Garnett says “they were on some level constructive”.

Now, of course, the idea is far less radical or controversial. As delegates assemble for COP26 this week, meat and its role in the climate crisis is a core issue. Even the official menus in Glasgow are plant-based, “with a strong focus on sustainability”.

Garnett and the FCRN can take some of the credit for this shift in mindset. What began life as a study into food’s impact on greenhouse gas emissions evolved into 15 years of pioneering research on consumption, diet, health, meat, animal welfare, livelihoods and trade, pushing the boundaries in what was, at the start at least, an emerging scientific field.

“When we started there were very few organisations out there trying to understand how the food system as a whole – and we didn’t even call it the food system then, it was the food supply chain – had an environmental impact,” she explains.

The organisation has since flourished from a mailing list of 50 people into a global membership of over 1,100 active members in 70 countries, helping to drive a period of increased recognition that food is central to many of the global environmental disasters we are witnessing today.

That recognition has largely come. Now, Garnett is facing a new challenge – and one that makes her meeting with the Meat and Livestock Commission look positively civil. She’s witnessing a renewed hostility and acrimony in the future of food debate, fuelled by the rise of social media.

Attacks on veganism, for example, no longer just come from parts of the mainstream livestock sector but also an “alternative environmental movement” that views meat substitutes as antithetical to their vision of an agro-ecological future, says Garnett. “All the nuance has been lost.”

Enter Table, Garnett’s new organisation designed to tackle the growing polarisation within the debate. It’s a collaboration between the University of Oxford, the Swedish University of Agricultural Sciences, and Wageningen University & Research, “mapping” contentious debates to help “highlight critical differences and areas of agreement, identify research questions to help resolve uncertainties, and suggest paths forward”, according to its website.

Table’s mission is not just to deliver facts, but engage with the underlying backgrounds, experiences and values that are often just as integral to shaping our opinions and beliefs. “Basically, I reached a point with the FCRN where everyone nominally agrees that the food system is broken – whatever that really means – but disagree as to what lies at the heart of the problems and what constitutes a solution,” explains Garnett.

“Unless we get to grips with understanding why people hold the opinions they do and where people are coming from, I don’t think we’re going to move forward at all,” she adds.

These are not just the practical questions such as big farms versus little farms, or more technology versus less, but the underlying moral and philosophical ideas that Garnett believes are just as essential to grapple with as a society if we’re to progress.

Questions like: should we care as much about people far away as we do about our local communities? Do we value our own species more or less than the non-human world? Should we consider food policy in the context of weeks, years, or centuries?

“We don’t talk about this enough,” says Garnett. “But what I’ve found when you engage the public with this is that people are thoughtful, reflective, and interested in those questions. And once people start to think about these issues, they say: ‘why didn’t we know about this before? Why did nobody tell us?’ There needs to be more space for that.”

Job: Director of Table and a researcher at the University of Oxford’s Environmental Change Institute

Table’s aim: To support a dialogue that is more nuanced, informed and self-reflective. Debate is essential, polarisation is damaging

2022 plans: Our next theme will be on power in the food system. What is power? What do people think about who has it or ought to have it? How do questions about power link to current debates around proteins?

Table’s first project is exploring scale in the food system, not only through questions on the more contentious issues such as local versus global, but the subtle aspects of how our perceptions of scale can influence our opinions on what a ‘good’ food system looks like.

But then an economist comes in and takes a wider perspective, looking at things like total land use, alternative land potential, and national meat consumption per capita, she explains. “And those two perspectives are both valid but they don’t necessarily meet in the middle. And that is the real difficulty.”

It is perhaps the biggest challenge Table, and in fact the entire industry, must face. What if hypothetical ‘better discussions’ still don’t deliver a consensus? What should we do then?

“I think we have to acknowledge where we’re coming from for a start, and what evidence base we draw upon. That could be formal academics but it’s also your life experiences and the rest of it,” Garnett says, before taking a long pause.

“And then… and then I don’t have the answers. I don’t. If you ask me in a year’s time – as we’ve only just set up Table – then maybe I’ll come up with something a bit more constructive. But that’s as far as I can get for now.” At the very least, it’s certainly provided some much-needed food for thought.