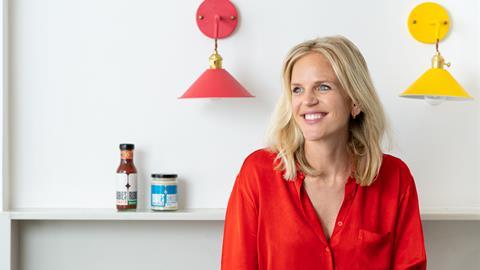 Jenny Costa: how Rubies in the Rubble is taking on Heinz

Having started as a kitchen table business, Rubies in the Rubble has attracted £2.1m of backing and now has the mainstream condiments market in its sights

Jenny Costa started Rubies in the Rubble in her kitchen, making chutneys and relishes from her mother’s recipes. Seven years on she’s ready to take on Heinz.

“It feels like a pivotal moment,” says Costa. Her mission is to take 3% of the highly monopolised ketchup market over the next three years - mostly from the category’s biggest player. But how?

“This area of the food industry hasn’t been disrupted for tens of years, and ketchup is an exciting area for us to be moving into for that reason. People are looking for something different.”

That “something different” is its purpose: making all of its products from surplus ingredients, aka food waste. To date, the brand has saved 231 tonnes of fruit and veg, equivalent to saving 256 tonnes of CO2 - enough to offset one million car miles. But the products don’t forget the basics.

“We are first and foremost a great-tasting food product that does things well, we have a sustainable message, and a better-for-you message as well - we’ve replaced half the sugar with surplus pears in our ketchup.”

“This area of the food industry hasn’t been disrupted for tens of years. People are looking for something different”

The ketchup, which launched in January after 18 months of painstaking research, is one of nine products in the range but it’s the biggest play so far. And it’s had some pretty positive feedback. “We’ve won quite a few awards already, including Casual Dining’s Innovation Challenge Award, a Great Taste Two-Star Award, and we also won one earlier this year at Food Matters Live. It feels like everyone we try it with, and every pub and restaurant, just loves it.”

In July, Rubies went through a major rebrand to shake off its “cottage industry feel” and move into the mainstream condiments market. “We have products that stand up in taste and flavour, but we need to look the part as well,” says Costa. “It felt like a bit of a growing up stage.”

To support its plans, the brand has just raised £2.1m from a variety of investors including customers and buyers, chefs, restaurateurs (Mark Hix is one), as well as venture capitalists and institutional investors. “We started our fundraising in May this year using the Seedrs platform,” says Costa. “We were aiming for £1.2m. By July, we had interest for £2.8m. We ended up closing the round at £2.1m.”

Sales are forecast to double to just under £1m this year. Most of the cash will be spent on marketing and sales to raise awareness of the brand. “To date, we’ve spent so much time on our operations, because our supply chain is quite complicated, and [we need to] make sure we’ve got a stable supply of surplus so we can grow to hit our targets.

“Our ketchup manufacturer [based in Portugal] produces tomatoes in fields around the ketchup site, and in the next valley across there are pear farmers. Our pear farmers have about 15% wastage every year. Currently we’re taking around 1% of that surplus.” As the brand expands, it hopes to increase that.

Family: Married with a son and another on the way

Potted CV: Masters in Maths & Economics from Edinburgh Uni, hedge fund in London for two years before launching Rubies in the Rubble

Worst career decision: My part-time job while getting Rubies off the ground turned out to be not part-time but all-consuming

Business mantra: Don’t overthink it - you’re a shopper too. Go for your gut, think like a consumer and pivot if necessary

Desert island meal: Anything spicy, with a starter of sushi and finishing with a plethora of ice creams

It’s not just ketchup Rubies wants to be known for. It has also spent a long time creating vegan mayonnaise - plain and chilli - which is made from aquafaba left over from hummus production. “We’ve linked up with hummus manufacturers across the country. When they cook their chickpeas, they normally just throw away aquafaba (bean water). Instead of pouring it down the drain, we collect it and turn it into our mayonnaise.”

Some of the investment will also go towards developing the team. “We’ve been a very small team - four people - and we’ve grown to 12 over the past 12 months. We’ll probably hire two to four more people in the next 12 months. We’ve been positioning the company for growth, so there have already been a lot of hires made ready for the next step.”

This year, Costa’s attention has been on the foodservice side, which accounts for 70% of ketchup consumption. About 60% of Rubies’ sales come from restaurants, hotels and pubs etc, with 35% from retail - delicatessens, supermarkets, Ocado etc. “Our online shop is a much smaller percentage, mostly for gifting.”

Until now it’s been all about “getting a foothold in the market”, lining up distributors, and getting one or two big accounts that encourage others to stock the brand.

Next year, though, Rubies has big ambitions in grocery. “We’re currently hiring a new retail manager to start working with some of the bigger national chains. It’ll be the first time we’ve had somebody from an experienced background in that area in Rubies.

“We have an ongoing relationship with Ocado and Waitrose for our relishes. We launched in Sainsbury’s with our mayonnaises a year ago. Currently it’s just in the free-from section, and only in 85 stores. We’re pushing to expand distribution in the next six months. (A week after our interview, distribution in Sainsbury’s increased to 160 stores.)

“We’ve done a lot of the legwork and are now set up to scale. With our ketchups and mayonnaises, we’ve chosen products we can really grow and go to scale with.” (More ‘out there’ condiments like the banana ketchup are the ideal complement in delis and farm shops.)

Rubies is upping its online ambitions too, with a plan to launch on Amazon later in the year. “A lot of consumers look for new products on Amazon, so there’s a big opportunity for us. We can be creative and trial different bundles of products, mixing them up dependent on demand and seasonality.”

As well as the consumer opportunity, Amazon provides a solution for bulk products to be delivered to smaller cafés and restaurants, utilising its extensive distribution network.

And in the future?

Rubies’ big concentration now is trying to “keep it simple” for the next year or so and get its product into “as many people’s hands as possible”, says Costa. “As a small brand, we’ve got to do that for a bit.

“Then, once we start moving, we have a folder full of our next NPD ideas, but we need to keep ourselves concentrated enough to give this a chance.”