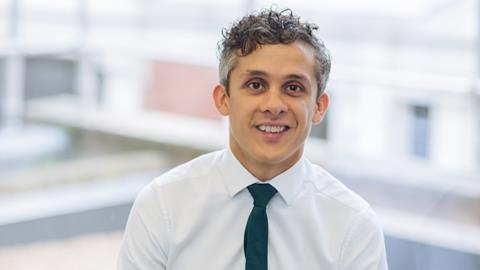 ‘Our biggest risk to health is inertia’: how Kieron Boyle is driving social change in food

The London bus from Herne Hill to Tulse Hill takes about seven minutes when the roads are clear. You could walk if there’s traffic. It’s a simple enough route: through the market, along the park, cross the main road and you’re there.

But by the time you arrive in Tulse Hill, a major change will have occurred. In the affluent Herne Hill, female residents can expect to live in good health until they are 74. In Tulse Hill, by contrast, where household incomes are on average £15k lower and people are five times more likely to be on unemployment benefits, the average age falls to 57.

Such stark health inequalities, of which food is a primary factor, is the exact type of injustice Kieron Boyle is out to address. Boyle is a strategist by trade, an alumni of the Prime Minister’s Strategy Unit under Gordon Brown and was selected as a ‘Young Global Leader’ by the World Economic Forum in 2014. At 41, he is already a seasoned veteran of delivering social change through commercial partnerships.

Since 2016, he has been CEO of Guy’s & St Thomas’ Foundation. It’s one of the world’s oldest health foundations based in London, and last month allocated £100m towards impact investments that aim to support a healthier society.

Last year, the foundation set up Impact on Urban Health, a new philanthropic arm to pioneer ways of addressing urban health inequalities in London that can be shared with other cities across the world.

In particular, says Boyle, it’s about “looking at where you live, your job, your race, how all those things affect things like childhood obesity. And then figuring out very practical ways to reduce those inequalities.”

The charity is concentrated specifically on the London boroughs of Southwark and Lambeth, a decision that allows it to “really get under the skin of those areas’ health challenges” Boyle explains.

While some may question if learnings in London can ever be applicable to Lagos, Boyle argues to the contrary. As Lambeth and Southwark are “so incredibly dynamic, diverse and unequal, it means they are a real mirror to trends happening in other global cities”.

If this all sounds rather abstract, fear not. Boyle is all about the practical solutions. Back in 2020, for example, Impact on Urban Health ran a series of store trials with Tesco to examine a range of approaches to improve the healthiness of consumer baskets, such as changes to pricing and promotions, store design and nutritional labelling. The trials were an overall success, with the best ones increasing fruit & vegetable sales by 13% and cutting confectionery sales by 22%.

The work didn’t stop at this local level. Boyle also incited Tesco to take action nationwide through his role as chair of ShareAction’s Healthy Markets campaign, a investor coalition with $5.8tn in assets.

Under his leadership, the coalition drew up a shareholder resolution last year that called on Tesco to do more to encourage healthy diets. That resolution was withdrawn after Tesco agreed to adopt a series of landmark health commitments, including a target to increase the proportion of UK and ROI sales from healthier food and drink from 58% to 65% by 2025.

While some critics argue that all Tesco has really signed up to here is to sell more food, Boyle is an optimist. He highlights £1 in every £5 spent on supermarket food in the UK is attributable to Tesco, and therefore its pledge “starts to have a real population effect. Plus, similar things have actually now been picked up by other supermarkets.”

If you could make one change to the food industry: Focus product and marketing innovation on making healthier food more accessible and more affordable. It’s good for business and the right things to do.

Dream dinner party guests: My grandparents, who aren’t around any more. They came from around the world and lived through such interesting times.

Boyle’s theory of change is one of incrementalities. He knows no single decision by Tesco or any other player will fix the health inequalities plaguing the UK. But these small wins are important, because they serve to address the faulty belief that the health challenges facing the UK are too big to battle.

Too often, this leads to a reluctant acceptance among companies or even government. “Our biggest risk is inertia,” says Boyle. “Ultimately, what we’re describing here are systemic challenges that were decades in the making and will take decades to solve.”

That’s why he’s taking a similarly optimistic approach to the introduction of HFSS rules in October. Although elements of the proposed clampdown have been put on ice, the arguably most fundamental strand – the ban on display promotions –will still go ahead. Boyle is, perhaps unsurprisingly, a strong advocate.

It’s about far more than just banning products from a few store locations, he argues. More importantly, Boyle says, “it starts to show that change is possible. And I really wouldn’t want to underplay the importance of that.” (Incidentally, Boyle refutes that HFSS laws are “restrictive”, instead branding them an “enabler” for companies trying to act in the interests of society by giving them a level playing field.)

That’s not to say he’s happy about the government’s decision to shelve other parts of the legislation: the ban on junk food multibuy promotions and pre-watershed TV ads. Boyle dismisses the argument that allowing promotions will help people with the rising cost of living. Instead he sees it as “an unnecessary step back in the fight against child obesity” that will undoubtedly hit poorest households the hardest.

“By mid-2030s, the NHS will be spending more treating Type 2 diabetes than any form of cancer. If there’s a focus on levelling up, rates of obesity-related hospital admissions are 2.5 times higher in the most deprived areas. Maybe there’s a misconception the public don’t support action in this area but they really, really do.”

And he’s adamant change is coming. As a Downing Street veteran, chair of a multitrillion-dollar investor coalition, and now head of one of the UK’s largest foundations, Boyle has observed a fast-growing recognition of the importance of healthy societies among both government and commercial circles.

There are more sugar taxes in the world than carbon taxes, he says, “and ultimately, consumers are calling for this as well”.