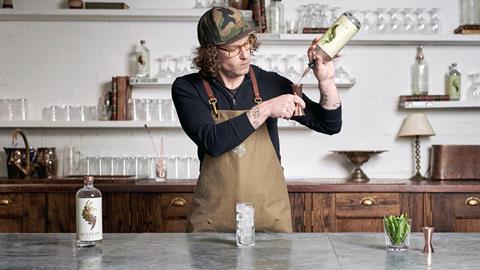 It’s arguably the most controversial drink on the market. And it doesn’t even contain any booze.

In just four years since its creation by former luxury brand designer Ben Branson, Seedlip has hit Britain’s on and off-trade like a hurricane, snapping up a slew of listings in the mults and major investment from Diageo’s incubator wing along the way (after an initial investment in 2016, the spirits giant took a “significant” majority share in the brand this year).

There have been, as Branson puts it, “a lot of ‘holy s**t’ moments”. Like when the first thousand bottles of Seedlip sold out in Selfridges in three weeks.

There’s no modest way to put it: Seedlip is one of the greatest drink success stories of the decade. Its rise to fame has spawned an ever-growing flock of imitators from big and small players alike.

So why has such a pioneering brand been met with such scorn, vitriol, and mockery from swathes of the drinks industry?

“We seem to make people angry because we even exist,” says Branson. “It’s always fascinated me that an inanimate object that you don’t have to choose, drink or buy can get such a reaction.”

“People aren’t just suddenly going to go back to alcohol. The demand is going to grow.

Perhaps it has something to do with the aeon-old grip drinking has on British culture. “The world of alcohol is very emotionally charged,” says Branson. “You’re always going to get people who fear change.”

Sea change is definitely underway. All the biggest players in drinks are snapping up brands or releasing virtuous takes on the big brands (think Budweiser Prohibition, Heineken 0.0% or Hardys non-alcoholic wines).

Spirits is the next frontier: non-alcoholic spirits sales are up 194% - making it the fastest-growing segment of no and low - with sales of Seedlip alone surging 107% over the past year [Nielsen 52 w/e 30 September 2019].

“This isn’t a fad,” says Branson. “People aren’t just suddenly going to go back to alcohol. The demand is going to grow.”

All of which means he isn’t particularly put out by the hate. “It flips the other way. We get emails and calls about how Seedlip has become part of somebody’s life because they’re ill, or pregnant, or it made an amazing gift to someone who couldn’t drink because they were dying of cancer. We’re not saving lives but it does weave into the fabric of people’s feelings.”

The best business advice I’ve ever been given: A very simple piece of advice when it comes to HR and recruitment from my dad: hire for what you’re not good at.

And the worst: Signing up for VAT is easy and you can do it yourself. I signed up for the wrong VAT scheme and we had to spend 18 months unravelling it.

Business idol: David Hieatt, the founder of Hiut Denim Co. He keeps human beings at the centre of what he does, makes things simple, concise, truthful and ultimately, really desirable.

The last great album I listened to: The soundtrack for Band of Brothers.

If I could have dinner with one person, living or dead: I would choose either David Attenborough or Willy Wonka (Gene Wilder’s Willy Wonka, that is). And my daughter, River. She wouldn’t be any kind of conversation but I can’t imagine a meal without her now.

What Branson does take umbrage with, however, is recent cheaper entrants to the market he alleges are cutting corners in production. This could potentially damage the category when it is still in its infancy, he argues.

“I feel concerned about the health of the category when so many new entrants are coming in with really poor quality. There are shortcuts in terms of process which are impacting retail price because they’re making it cheaply and poorly.”

Branson doesn’t directly name any brands. Still, recent launches are certainly more affordable than Seedlip, whose Garden 108 variant comes at £26.50 for 70cl in Waitrose. By comparison, a bottle of Strykk Not Vodka, the 0% spirit launched by Funkin Cocktails founder Alex Carlton in 2018, costs £16.99 for the same sized bottle through online retailer Zeroholic. Lidl launched its own knock-off called CeroCero in October, coming in at a minuscule £9.99/70cl.

“This is all a concern for the consumer,” says Branson. “It’s a fragile category and we want people to have the best experience possible. We’ve got to be really proud of what we’re doing and what we’re putting into this space.”

Isn’t he just trying to justify Seedlip’s price? His drink, after all, is commonly criticised for being too expensive. The aforementioned Garden 108 bottle is almost as much as a bottle of full-strength Hendrick’s. With no duty involved, Branson must be making the kind of margins booze brands can only dream of. Or so the argument goes.

Branson isn’t ashamed to talk about price. “It is expensive,” he says, and stresses he doesn’t feel like he needs to justify it.

“We need to educate rather than it be about justification. I can tell you that it costs more to make a bottle of Seedlip or Aecorn than most alcoholic products on the market. “It takes six weeks to make a bottle and we’re using and sourcing a lot of different single-origin ingredients,” he says. “We use the same equipment and a lot of the same ingredients. But we distil every ingredient individually. Each goes through its own process of being blended in a solution of alcohol and water and then it is distilled and we remove the small amount of alcohol we use to capture and concentrate the flavour.”

The category, he says “can have a long, profitable future but that means everybody has to focus on quality and the long term”.

This means ditching much of the twee lexicon that has accompanied the rise of low and no. “Language is really important,” he says. “We need to stop talking about ‘sober-curious’ and ‘mocktails’ and infantilising the category.

“We’ve got to bring the sophistication that it deserves, because it really doesn’t matter that it doesn’t have any alcohol in it. This category is for adults on grown-up occasions. It should have exactly the same theatre, the same language, the same care and attention.”

So what’s next? Branson wants to broaden Seedlip’s range. It recently launched its own Seedlip & Tonic RTDs to tap the vogue for premixed cocktails, as well as a posh 20cl bottled ‘Nogroni’ cocktail.

“We’re trying to keep the consumer in mind - that purchase at the end of the day before you get on the train home is definitely an occasion that’s going to massively explode for us next,” he says.

Meanwhile the recently launched Aecorn - a standalone trio of drinks (one of which is essentially a non-alcoholic Aperol) - has already been listed in Selfridges and Waitrose.

It’s more than a spin-off. Branson has serious ambitions for the drink, and has appointed former head of spirit creation for Belvedere Vodka, Claire Warner, as Aecorn’s MD. Warner initially joined Seedlip as head of new brands in January 2018.

Branson is also building a “full laboratory” on his family’s Lincolnshire farm to experiment with a deluge of new ideas. “I have a long list of things I would like us to explore in terms of product development,” he says. “We’re also starting to look at partnerships a bit more.”

What’s key, says Branson, is that whatever Seedlip does, it breaks new ground. Being first to market with its core drinks allowed it to define and set the precedent for every non-alcoholic spirit that followed, and Branson wants to keep this advantage.

William Reed - the publisher of The Grocer - has launched a new trade show for the Low & No Alcohol sector. For more info visit low2nobev.com