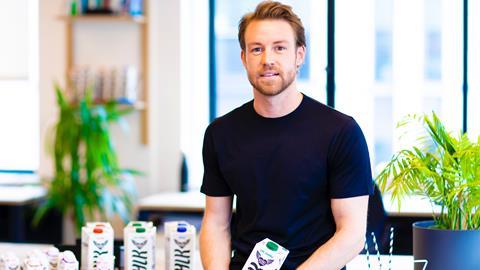 Rising up through the ranks at Rebel Kitchen: Adam Thompson

In roles from sales director to MD, Adam Thompson has overseen Rebel Kitchen’s growth from a small startup to a global proposition

As a child, Adam Thompson was a perfectionist. He always pushed to be the best at sport, and the best in school, and, more often than not, he achieved it.

This hunger for excellence has carried into the way he approaches running Rebel Kitchen. “Our ambition is massive. We want to have the best plant-based alternative products in whatever category we choose to be in,” he tells The Grocer.

We’re sitting in the boardroom of the start-up brand’s London head office. It’s just moved as the team continues to expand. “When the new people all come in there will be 24 in total.”

When the role of sales director at Rebel Kitchen came up in 2015, Thompson had just left Philips and, having worked at various big corporates, he was looking for something different. “I thought: do I now go and do something by myself? I’d learnt along the way – with corporate support and backing and teams and money that was not mine personally – the pitfalls, the mistakes, how to not fall over in the future.”

He was introduced to Ben and Tamara Arbib, the founders of Rebel Kitchen, “through serendipity”. They had created their brand the previous year and wanted to take it out, but weren’t sure on strategy, retail biases, where to go first or how to build through fmcg.

That was the challenge for Thompson. “It happened fairly quickly. We presented a sales strategy, we built it out, and at the same time Tamara went on maternity leave. It was very much like: here you go, here’s the business – figure it out.”

From then on, his task was to build the solid foundations and structure for long-term sustainable growth, something you don’t always see in start-up challenger brands. “It’s easy to get in, but once you get past that first £500k sales, the next tranche is how you get to £3m, and then how you get past that.”

“It was very much like: here you go, here’s the business – figure it out.”

He was determined to put the “stepping stones in place” at Rebel Kitchen so it was consistently attractive to customers, and it was “selling a story that was only skin deep”.

“You’re seeing more interest from the big corporate guys in some of the smaller guys, so that’s quite fascinating because no longer is it that you look to one person or one business or one corporation for what’s coming out next. It could come from anyone who has a great idea.”

Sustainable growth has been especially challenging in the crowded alternative milks category. “Plant-based milks have exploded over the past few years, so there’s 15 types of plant-based milk and there’s five of almond and four of oat. But there’s no need for that, you only need a couple.”

Rebel Kitchen wanted to create plant-based dairy products under the umbrella of its ‘Mylk’ range, which tastes and can be used like dairy. In August 2017, it launched a range of one-litre milk alternatives which “replicate the qualities of cow’s milk” by combining six ingredients. These included coconut cream to mirror the richness of milk, brown rice for sweetness, and nutritional yeast for “grassy notes”.

It then moved on to yoghurts. “What people are telling us, or what the data we buy is saying, is that they’re buying four or five different types because they’re not using it in the way they want to. That can also apply to yoghurt. You don’t want a coconut-tasting yoghurt all the time, you just want something that tastes like dairy, but is made from plants.”

This strategy looks to be paying off, as the business has grown from a small startup to making annual sales of around £6m across several countries, including Australia, Germany and France. The brand “tried the US”, but found it would have had to have put “all of its eggs” into that market to make it work. “The US is very much pay to play and requires big raises, privately-funded, with longer-term plans. We would have needed to actually focus on developing a US-specific range, or decide to move away. So we pulled back because, whilst we’re in other territories, the UK is still the majority of our business.”

In 2017, Thompson was named one of the winners in The Grocer’s Top New Talent awards. At the time he was still commercial director but has since been promoted to managing director. “It was always the plan, really,” he says. “As a director team we work really close together. Tamara’s got four children so she didn’t want to focus on the business as a day to day. Over time we built towards that.

“It’s a challenge because your focus is on one or two areas as commercial director, but then you’ve got the whole business to look after [as MD], so going back to how I have evolved, you have to think on your feet so much more and make decisions without necessarily going super deep into all the information.”

The move up has meant he has had to let go of some of his perfectionism. “In business, you have to find that sweet spot between aiming for perfection and minimum viable product. Let’s get it going and then let’s understand the feedback and what comments we’re getting from consumers or other partners and the suppliers we’re working with, and then adjust.

“The only constant is change. It would be naive of us to be like: tada – product, and then sit back and think that it’s done. We’ve made a lot of tweaks in product, whether it be through the processes we use or finding a more sustainable source of ingredient, or whatever it may be.”

This incremental development will continue, and alongside it, more radical shake-ups are on the cards. Rebel Kitchen’s vision is to “revolutionise food” by making healthy alternatives that taste “mind-blowingly good”. “We question received wisdom and demand that we all rethink our unsustainable approach to health, nutrition, consumption, agriculture and manufacturing.”

The plan is to target categories where there are unmet consumer needs by providing the “best plant-based alternatives, which taste and behave as people expect them to”.

“We want people to be able to understand what they are consuming by repackaging nature for convenience and only using ingredients they can understand. By doing this, we help people take better control of their individual health.”

Entries are now open for The Grocer’s Top New Talent Awards 2019. Please visit www.thegrocer.co.uk/people/top-new-talent for further details and to enter.

Potted CV: Did a business degree at Bath University and then joined a grad scheme at Aldi. Worked as a business executive at Tata Global Beverages for two years and a national account manager at Philips for three years, before joining Rebel Kitchen as sales director in May 2015. Promoted to commercial director then managing director.

Best career decision: Making the leap out of corporate to startup

Best piece of advice, given or received: The only constant is change