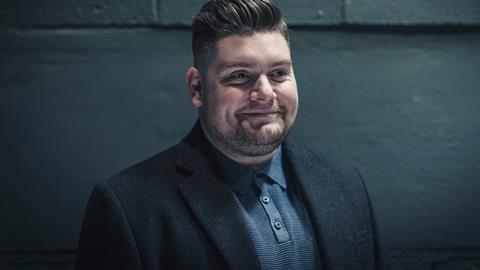 Big interview: Sam Dennigan on growing Strong Roots in the US and beyond frozen

In just four years, Strong Roots founder Sam Dennigan has won listings for its ‘aspirational’ frozen veg from Musgrave to Morrisons. Now he’s setting his sights on the US and looking to develop beyond the freezer

It’s not often someone points to the toilet when you ask them what their biggest achievement to date is. Particularly when the person in question is the founder of a multimillion-pound brand that claims to have sold UK grocery’s first pack of frozen sweet potato fries.

On closer inspection, Sam Dennigan’s intentions become clear. Above the toilet door in Strong Roots’ East London office is a framed Harrods bag. “We became the very first non-ice cream frozen brand to be sold in Harrods last Christmas,” he beams. “That was a huge moment for me.”

Looking at the Strong Roots range, it’s not hard to see what tempted Harrods. The packs are classy - each and every one was designed by Dennigan, a former art student - and the products a world away from your standard bag of mixed frozen veg, with a price point that reflects premium credentials. And while that may work for Harrods, it is perhaps more surprising that the products have found their way into each of the big four’s freezers too. So, how did the brand convince the masses that high-end frozen veg was worth splashing out on?

As is the case with so many discoveries (see also: penicillin), Dennigan stumbled upon the potential for what he calls “aspirational frozen vegetables” by accident. The son and nephew of the two MDs of family business Sam Dennigan & Co - one of Ireland’s biggest fresh food consolidators - his initial ambitions lay outside the freezer.

“My original objective was to create an instantly recognisable brand within the fresh market, one that tells a story about where the products come from,” he says. In researching brand opportunities in fresh, Dennigan noticed a glaring gap in the market. “I realised a lot of shoppers weren’t finding these lesser-known vegetables like squash and sweet potatoes in either fresh or frozen,” he says. “I also saw that the lack of perishability in frozen gives a much bigger scope to tell a story as a brand, and there was more of a margin for brands in frozen than in commoditised fresh products.”

After discussing the opportunity with his family, the decision was made for Dennigan to leave the family business and focus solely on the new frozen venture. “We all decided the best way forward was for me to go into the unknown and give it a punt.”

One accelerator programme and a £60,000 stocking loan later, Dennigan was in a van delivering Strong Roots’ first product (those frozen sweet potato fries) to 100 Musgrave stores across Ireland. “We knew others were coming to market with sweet potato fries but we were two or three years ahead at that point and the first to the grocery market,” he says.

“We’re giving shoppers something they didn’t know they wanted, but that made complete sense once they saw it”

Orders have poured in thick and fast in the four years since. Strong Roots’ sales are expected to top £41m by the end of 2019, with a 14-strong range spanning high-end products like Cauliflower Hash Browns, Kale & Quinoa Burgers and Broccoli & Purple Carrot Bites.

The success of the brand is particularly impressive considering it is charging a premium price in a category many still perceive as ‘cheap and cheerful’.

“It’s not been easy challenging that perception, but our products demand a higher price and people do get why,” says Dennigan. “Shoppers understand what value is. We’re giving shoppers something they didn’t know they wanted, but that made complete sense once they saw it.

“All our products are plant-based, and consumers are moving away from traditional diets towards more functional, healthy foods that are good for themselves and for the planet,” adds Dennigan.

Personal mantra: Be inclusive, not exclusive

Drink of choice: Pint of Guinness

The next step is across the pond. Following a £14.2m cash injection from New York private equity firm Goode Partners in September (in exchange for a minority share), Strong Roots has expanded into 3,000 US stores and opened a new office in New York. The speed of the brand’s evolution, from a small Irish startup to an international challenger with a target of £246m in sales by 2023, is not lost on Dennigan.

“Our growth has been incredible in the four years since we’ve launched,” he says. However, “the move into the US is going to be complicated because the market differs from the UK and Ireland in practically every way, not least because it’s a continent rather than a country. We’re essentially launching into 50 countries at the same time. But we set out to become a global brand, and this is the next step.”

Strong Roots’ ambitions aren’t restricted to the freezer, either. “We’re working on a lot of new products in categories spanning from snacking to fresh and chilled.” Many of those are set to land next year.

It may be evolving out of the freezer, but there is one mainstay from which the brand is unlikely to stray. From his beginnings in fresh produce to his “pride and joy”, a floor-to-ceiling green ‘living wall’ that greets every visitor to Strong Roots’ London office, it’s clear plants are at the heart of both Dennigan and the brand.

And considering the current swell of attention around the sustainability and health benefits of adding more plants to your diet, that can’t be a bad thing.