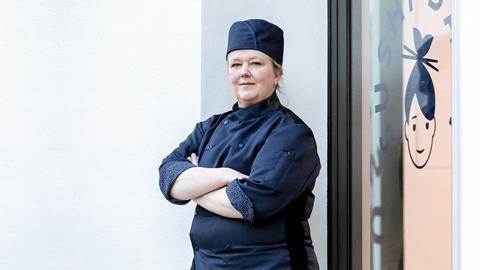 For 25 years chef Silla Bjerrum has helped bring sushi into the UK mainstream. Now she’s adding some authentic Japanese flair to the high street too

Prophetically for a sushi chef, Silla Bjerrum’s mother named her after a fish.

Sild is Danish for herring, the oily fish she’d craved pan-fried and served with creamed spinach while pregnant.

It was followed by a thoroughly foodie childhood too, with summers spent cooking Danish specialities from scratch by the sea and sailing trips seeking out local smokehouses.

But to begin with, Sushi Daily’s global head of innovation and development pushed back. She opted to study philosophy at university in London instead, with no intention of becoming a chef - until fate intervened once again, this time in the form of a small sandwich bar in Chelsea. “It was simply a student job making Danish open sandwiches - making rye bread and meatballs in my little flat and finding good-quality herring,” she remembers. Sold alongside the sandwiches though was a selection of sushi. “And the sushi was doing far better. There was hardly any sushi at the time, so we were some of the first to do it.”

Potted CV: Helped develop sushi offer at Birleys Sandwiches in the 1990s, before co-founding Feng Sushi in 1999. Spent 16 years there before a brief spell at Whole Foods, joining Sushi Daily in 2017.

Career high: I won a couple of prizes. I was MSC chef of the year in 2015 and then won most sustainable fish restaurant in 2013.

Business ethos: Quality is key. You can spend hours on P&L and budgets, but if you start with a quality product, look after your margins and train your staff, then it’ll all fall into place.

Best piece of advice you’ve received: Look after people. If you look after them, they’ll look after you. Also, it’s important with chefs to teach them business skills and to understand the numbers.

Hobbies: Cycling, and I’m in my second year of an allotment - I have one in Chiswick. We’re growing herbs and a cabbage bed for our kimchi and sauerkraut and all our pickles.

And do you still eat sushi? Every day. But only good quality.

One of the shop’s owners “had been running a Japanese restaurant in Wales for 25 years and he taught me. He was a big guy and liked a tipple and so I quickly took over. I got better and better and there was a real buzz around there. Eventually I fell in love with sushi and decided to go to Japan to research more.”

It was there that Bjerrum was exposed to the reverence with which the Japanese view the cuisine. “I was so used to being totally self-taught and figuring it out by reading cookbooks and going to the library and other restaurants. There the environment was so strict.

“I think it’s because there’s so much respect for the ingredients and the techniques. I once learned how to make a Japanese omelette in a square pan. It took six chefs to show me - one cracked the eggs into a bowl, another whisked and added the mirin, soy sauce and sugar, another heated the pan, another folded the omelette and then the master chef came at the end and did something with a rolling mat and turned it into a tree. And then the final one began sweeping the floor.”

“I once learned how to make a Japanese omelette in a square pan. It took six chefs to show me”

It’s arguably this experience that has shaped her career here in the UK ever since, changing role each time she felt the sushi being served up didn’t quite meet those high standards. Since she returned to London she has created the City’s first on-the-go sushi offer for Birleys Sandwiches in Canary Wharf - “we really cracked that City market. Twenty years ago there was hardly anywhere to eat in the City at lunchtime” - before co-founding the first sushi delivery service, Feng Sushi - developing menus, training chefs and growing the business from one to six outlets. Then came a stint at Whole Foods Market, before finally joining Sushi Daily two years ago.

There, despite a scale that now spans nearly 800 sushi kiosks operating across Europe, many housed in major grocers, she believes the quality has been maintained. “I had been looking at Sushi Daily for a long time. And I think I share one of [founder] Kelly Choi’s missions in life, which is to democratise sushi and make it available for everyone. I think what Sushi Daily has achieved in terms of quality across so many sites is amazing.”

How has it managed that? “There’s a massive team behind the scenes. The artisan chefs are key and the procurement team is amazing. Kelly is very strict in terms of quality, which is the power of the company.”

That quality isn’t mirrored everywhere though. She isn’t keen on pre-packed supermarket sushi where the rice isn’t “day fresh” for instance. But it’s partly a price of the ubiquity of sushi in the UK now too, something she has been working towards for decades.

Once the preserve of an entitled few dining at top restaurants, the proliferation of on-the-go sushi packs are a sign it’s well and truly shifted to the mainstream. “It’s interesting how sushi has evolved. Now it’s obviously everywhere and at very different qualities.” What’s behind that? “Sushi is highly addictive. In Europe we love quality salmon and it also has a reputation as a healthy food. And it’s intergenerational, as young people and children like it.

“Unfortunately though, sushi has been turning into - particularly in this country - a lunchtime food. We see it as an alternative to sandwiches, which I think is a shame. In Japan it’s a ‘going out in the evening’ kind of food, a celebratory food for the weekends.”

Our sushi boxes and made daily in our kitchen. Our menu changes seasonally so check it out on our website (link in bio). ⠀

That’s one of the things she’s looking to address with the new Sushi Daily To Go concept we’re sitting in on New Oxford Street, and on which Bjerrum has been working for the past year.

Communal tables encourage people to sit and take time over their California rolls and salmon nigiri. As with supermarket kiosks, chefs prepare dishes in full view at a central open kitchen where strategically placed mirrors give a bird’s eye view of their expert slicing and dicing. “You can spend the whole evening if you want, but equally you can come here if you want a quick bite of quality food,” says Bjerrum. She created 70 additional recipes for the outlet - “more health food, more plant-based, more high street savvy” - which includes complementary items like juices and cakes to create a full meal offer. There are plans for a dinner service too.

The hope is to roll out the concept more widely, though for Bjerrum it’s back to the kitchen to test new grains, experiment with plant-based options and incorporate more local veg. Oh, and a trip back to Japan too, to feast on the best sushi in the world.