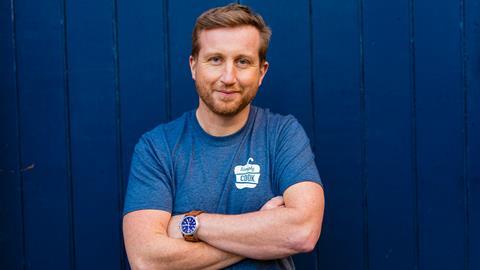 Taking a DTC meal kit brand into stores has been a ‘long, tough journey’. But SimplyCook’s retail MD has come out the other side smiling

Meal kits suppliers are the flavour of the month in this digital age. Yet the irony is that, like a lot of DTC businesses, they can enjoy huge sales using the conventional route to market: the supermarket.

That’s been the case with SimplyCook. With listings in Waitrose, Asda, Co-op and Tesco Express, the next phase of growth will see SimplyCook continue its expansion into 700 main estate Tesco stores, with six recipe kits and four exclusive flavour boosts set to hit the retailer’s shelves on 3 February, increasing its total listings to 2,300 locations.

It’s been an extraordinary journey for SimplyCook. But for retail MD Sam Tierney it’s been anything but simple. When he joined SimplyCook as retail MD two years ago, there was no retail business to speak of. And his own background had done little to prepare him for working at a startup. Beginning his career in Molson Coors’ graduate scheme and moving to Heineken, Red Bull, Itsu and Vit Hit, his career has “gone from big companies to smaller ones, but the jobs have gotten bigger” he admits.

So how has he gone about it? How do the two offers differ? And with sales so strong might it be better off just focusing on retail?

It’s been “a rollercoaster - one moment things are great, the next you freak out they’re falling apart”. In fact “I sometimes feel like I am in a startup within a startup”, he says. When he started, the DTC recipe kit supplier had witnessed incredible growth, with sales doubling in 2018 following threefold growth in the two previous financial years. But after analysing the market with founder Oliver Ashness, he set out “to take the best it had learned from online into retail”.

Family: Wife and two girls (three and one)

Pets: No pets. Two kids are enough for now

Worst career decision: Going to Thailand with two toddlers at a key moment for SimplyCook - least relaxing trip ever

Best achievement: Sailing across the Atlantic to the Pacific

Desert island essentials: Knife, matches, cold beer, kitesurfing kit and a pepper grinder, because you need flavour with your food

Hobbies: Kitesurfing in summer and skiing in winter

With his background working in fmcg brands, Tierney was “blown away” when he first joined SimplyCook, at the speed of development. “It’s just so quick. We try four recipes a week, sometimes we are launching two a month and that is continually adding to the range. Very quickly we can see what is working and what is not.”

“There is so much that retail can learn from it, both from the information we have on the customers but also from this very fast-paced, iterative, data-driven way of working.”

Venturing into retail, however, was not as simple as just replicating the successful online model. Tierney had to work hard to adapt the DTC proposition to fit a constraint-ridden retail environment. From designing specific packaging, which he admits kept him up at night, to competing with established brands such as Dolmio and Old El Paso and dealing with buyers, there were many challenges the rest of team did not understand.

“I sometimes feel a bit like a translator between the online team and the retail world,” he says. “Our team is not used to having such limitations. The idea that someone would make a decision once a year and not change it sooner - it’s mind-blowing for them,” he says.

“Because I get retail and understand buyers, I can empathise with the way they are working, and I was able to adapt the online proposition to fit the retail environment. Although there are a lot of parallels, not everything is the same.”

“As a challenger brand we have a right to challenge the status quo. It’s in our DNA”

After gaining initial listings, Tierney’s challenge is now an operational one. The brand’s mission in store is to help people answer the “what’s for dinner?” question, he explains. And it is a mission it cannot fulfil from its current positioning within the herbs & spices or foods of the world aisles.

“That is really not where people are trying to work out what to have for dinner,” Tierney says. His objective is now to convince retailers that putting SimplyCook kits front of store will make for a no-fuss experience, providing inspiration at the beginning of the shopper journey.

“As a challenger brand we have a right to challenge the status quo. It’s in our DNA,” he says. “If that means challenging retailers on the way they do stuff and trying to break the routines and same-old behaviours of retail, then we should do that.

“We are at a point where we have a retail business and we are in a great position with the listings and products we have got. Now it is about really building on that. It is a long, tough journey to go on but an exciting one,” he says.

Crucially, the two businesses are complementary. SimplyCook’s monthly customer numbers are set to top 150,000 in 2020, revenues are approaching £15m and the startup has now attracted £9m in funding (£2.25m just this month). It is still loss-making, which Tierney puts down simply to the brand’s continued expansion. “We could be profitable, but we are investing really hard in growth,” he says.

So despite the sizeable and growing number of stores under its belt, SimplyCook will not back down from its initial DTC proposition. Its vision is to end up “fairly 50-50” between online and retail. The dual model “is really our strength” with data and reviews from the online business informing each in-store decision, Tierney says.

“The idea is to have one brand and two visions,” he explains. “The retail mission is different from the online one. In retail our job is to help customers sort out dinner for that evening. It is an impulse purchase whereas e-commerce is about taking customers on a journey through food, discovering hundreds of new meals month on month.”

Although that journey often feels like a rollercoaster, Tierney says he is excited to be inspiring people to cook new meals. But as important as the journey of discovery is answering the crucial “what’s for dinner” question. SimplyCook seems to be doing just that.