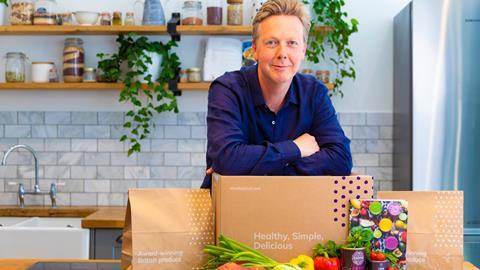 Since taking over as CEO last year, Tim Lee has helped take premium recipe box startup Mindful Chef to the next stage of its growth

Prior to joining Mindful Chef in September last year, CEO Tim Lee already had years of experience in building brands from scratch. Or at least from inside “the mothership” of a large organisation.

In a 13-year tenure at Tesco, Lee had set up the supermarket’s sourcing arm, growing it from zero to a £300m internal business, and was among the team that launched the mult’s (failed) Fresh & Easy concept in the US. At M&S, he built up its online tech and operations team from nothing.

And so moving from a supermarket HQ into the startup’s rather cosy Wandsworth office, its 35 staff all within shouting distance of one another, wasn’t too much of a shock to the system, he insists.

“There’s quite a lot of parallels,” he says. “Even in the big plcs, when you go to another country you still have to learn how to do things differently and independently. In America nobody knew about Tesco so you were selling the business and developing a vision and strategy to win hearts and minds.” At M&S, too, he was “looking at the future of online and running trials with lots of young, disruptive companies”.

Which was how he first encountered the young recipe box business. Set up in 2015 by schoolfriends Giles Humphries, Myles Hopper and Rob Grieg-Gran, Mindful Chef was, by the time Lee joined, on its way to sales of £17m, delivering 20,000 of its gluten and dairy-free meals per week to health-conscious customers.

But to scale up - and secure Series A funding - they were looking for outside experience. “There was recognition that if you want to scale a business you need to bring expertise in and leverage the knowledge of people like myself,” says Lee. His appointment was quickly followed by other key hires, such as Kate McNuff (previously finance director at notonthehighstreet.com) as CFO and Andriana Gavrilovic (previously senior brand manager at Net a Porter) as head of brand.

The three founders are still closely involved in the day-to-day running of the business. And their hires seem to be working. In January, within four months of Lee’s appointment, the business had secured £6m of funding, led by private equity firm Piper. It signalled huge confidence in the business. Particularly given a market that’s beginning to feel, from the outside at least, awfully crowded. “IGD are forecasting £6bn growth in online - that is the largest in cash terms growth over the next five years of any channel, ahead of the discounters,” Lee points out. “So yes, there are lots of competitors, but that’s because customers are coming to this world and they want that service.”

For its part, Mindful Chef is firmly targeting those consumers willing to fork out a bit more for their health. “By providing people with super convenient - and, importantly, delicious - food that’s easy to prepare you get a great result. That’s tick one. It takes the cognitive load away as you’re not worrying about it.

“The other point of differentiation is that we focus on how we do the business.” That means achieving B Corp status - it’s one of only 200 UK companies to do so - and also forging a partnership with charity One Feeds Two since 2017, by which the business donates a school meal to a child living in poverty for every box purchased. “It’s customer expectation now that businesses do the right thing,” says Lee.

Buying into an ethical business that also likes its beef grass-fed, its chicken free-range and its vegetables locally sourced does come with a more premium price tag, though. At the time of writing, even by selecting the cheapest meals from its 16-dish menu, a box of five Mindful Chef meals for two would cost £57.50. At Hello Fresh the equivalent would be £41.99. At Gousto it would be £34.99 for four meals. Has charging more ever stymied growth?

“No. Growth is not a problem for us. Keeping up with the growth is the problem. In fact, customers talk about how they end up saving money. They say it’s delicious food, that comes pre-portioned so they have no waste and it stops them going to shop elsewhere so they’re not filling the fridge up with things they’re not going to eat. They translate that to great value for money.”

The model is profitable too, he points out, albeit with profit currently reinvested back into the business. It’s exactly how it should be, he says. “This time is about growth and building the category. There’s always investment up front. The model makes money at product level, but you have to invest to grow the market.”

It applies to the industry at large, he adds. “Recipe boxes are less than 10 years old and the industry itself is probably a lot closer to profitability than other challenger industries like car sharing businesses.

“We’re much leaner than a traditional business model. We’ve got the business to this size with only 12 people. We have tech overhead and people overhead but no big infrastructure in, say, marketing, and there’s less than 1% waste in our operations.

“We also work directly with our growers and packers. We use technology to predict what customers are going to eat and need and order - we can predict using our algorithms six to 12 weeks out - so we know how many chickens we need to grow way out at 12 weeks and start refining that down. The model is much more efficient, which gives us confidence we can grow in the future.”

And armed with its most recent £6m cash injection - plus high-profile backers that include sports stars Andy Murray, Victoria Pendleton and Will Greenwood - Lee is currently looking at the potential growth that comes from going beyond recipe boxes, too.

About two months ago it launched a range of frozen meals prepared with the same ingredient credentials as its recipe boxes that anyone can buy direct, individually or in bundles. Would it consider selling through retail? “We’ve been approached. We’re a D2C model so we know our customers intimately and that’s our preferred route. Would we do it? Never say never.” Earlier this month too, it added a range of six frozen smoothies.

“It’s about going beyond recipe boxes and being more relevant, more often across the week with products that are healthy and convenient,” sums up Lee. “Recipe boxes are our core and that’ll be the engine room but there’s definitely customer appetite for more products that meet more of their needs.” All taking Lee one step closer to steering his very own mothership.

Potted CV: My background is all food. Everything from roles at Spitalfields market, to factory work, 13-plus years at Tesco and becoming head of online & strategy at M&S.

Steepest learning curve: I learned a lot through the Tesco US venture. It’s classic in America that you’re failing fast and learning from it.

Business ethos: It’s about being a values-driven business doing the right thing.

Best piece of advice: It’s a great industry so enjoy it. And when things don’t work, give it another go.

Hobbies: I’m a big saltwater fly fisher. I travel the world doing it.