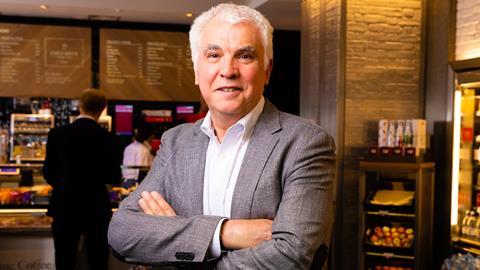 You have got to give every consumer all the information they need to make the right choice. And then you’ve done your bit. It’s up to them to decide whether to buy that product.”

That was Tim Smith’s mantra when he first agreed to join Pret a Manger as its food safety advisor in the wake of the tragic deaths of Natasha Ednan-Laperouse and Celia Marsh. And it’s been the guiding principle of his recently completed review of the sandwich chain’s policies, which makes more than 80 recommendations for how it can improve consumer protection.

Putting consumers at the heart of everything has always been a priority for Smith. A microbiologist by training, he took his first job at Unigate because there was “some link to the food science element of what I’d done”, he says, but also because “I liked the idea then - and now - of food being so close to people’s lives”.

It’s why he’s continued to work in a business to consumer environment, he says, with career highlights over the past 40 years including leadership positions at Northern Foods, Sara Lee and Arla Foods, as well as five years as Tesco’s technical director, where he played a key role in the supermarket’s sugar reformulation programme and food waste initiatives.

Family: Married, partner is a charity events organiser, three kids in their 30s and two grandchildren

Potted CV: Food manufacturer: branded and own label for 30 years last as CEO of Arla Foods, five years a regulator as CEO of the FSA, five years as a retailer at Tesco

But arguably his most defining role was as the boss of the Food Standards Agency from 2008 to 2012, during which time his proudest achievements include reducing the nation’s salt intake, transforming the UK’s food hygiene rating system and winning the industry round (more or less) to its traffic light food labelling scheme.

He does have regrets, though. “When we were putting together the allergen regulations at the latter end of my time at the FSA, we knew the best thing to do would be to give every consumer as much information as you possibly can so they can make their own decisions. So either labelling or high-quality shop information, or a combination of both,” he says. “And as I remember it, when we reviewed how the regulations would be applied, we imagined that we would capture a Pret because it was possible for them to label.”

But the Food Information Regulations introduced by the government in 2014 did not capture Pret. Instead, there was a loophole on pre-packed for direct sale food, a loophole that Dr Sean Cummings, the coroner who led the inquest into teenager Natasha Ednan-Laperouse’s death, accused Pret of using to “evade the spirit” of the labelling regulations.

“I don’t know why the scope wasn’t to include Pret and its peer group at that time, but that would have solved most of the problem,” sighs Smith. “So my mea culpa is should the FSA, in 2011 through to 2014 when the regulations came in, have pushed harder to have food businesses who could label, do so?”

When Smith was first approached by Pret’s CEO Clive Schlee for help last year, he didn’t know whether or not the chain was labelling its sandwiches with ingredients and allergens. “When he said ‘we put that information on the website’, my heart sank, because that’s not the point of purchase,” he says.

But he was, and still is, “a big fan of Pret and its style of food preparation”. And he was quickly convinced that Schlee and JAB Holdings - the German investment firm that had acquired a majority stake in Pret in May 2018 - were serious about making meaningful changes.

So he agreed to come on board as chair of its new Food Advisory Panel and to conduct a wide-ranging review. “At that stage, Pret was in a little bit of no man’s land. It was promising to make things much better without really knowing what that meant,” he says.

Before he got started, though, Smith made Pret agree to several important principles. His mantra of giving consumers all the information they need to make the right decision was top of the list, but Pret also had to agree to be transparent, authentic, and to roll out any changes it made in the UK to its international stores.

It was Smith’s misfortune to arrive at Tesco just as Horsegate hit. But it was also an opportunity and one of the biggest lessons he learned from the experience was to “never waste a good crisis”, he says. Tesco used the discovery of horsemeat in some of its products as an opportunity to overhaul and simplify its supply chains and develop a new model for sourcing.

As a result, the supermarket has a far more robust supply chain. “If you are in a business as big as Tesco you have to have the ability to take your hands off knowing the systems you have got in place, the default processes, are going to support the weight of the work going on,” he says.

Now, he wants to do the same for Pret. In total, he’s made 88 recommendations, covering everything from its supply chain through to new product development, incident management and reporting, and staff training.

The latter is crucial, he believes. Working for Tesco through Horsegate showed Smith the importance of having “the support of really good people”. And he believes Pret’s success will depend on the team members in its stores understanding not only what they need to do, but why.

Pret’s senior management team has accepted most of Smith’s recommendations, regardless of cost, and is in the process of putting them into practice. That includes full ingredient labelling, a new risk-assessment tool to minimise precautionary labelling, a quarterly incident report, recipe reformulation to remove allergens and new incident management procedures.

Pret’s allergen overhaul: what are the changes and do they go far enough?

In doing so, the chain has transformed itself into an industry leader on allergens. And with mandatory full ingredient labelling for all pre-packed for direct sale foods set to come into force by 2021 in England, Wales and Northern Ireland under the new ‘Natasha’s Law’ announced by Michael Gove this week, its rivals now have to catch up. “When I first began advising them it was far from being a done deal that Pret would fully ingredient label its pre-packaged goods,” says Smith. “I’d like to think my work and counsel got them to do the right thing and I’m absolutely delighted with the progress we’ve made together.”

He isn’t interested in competitive advantage, though. He’s interested in doing the best for consumers. So he’s convinced Pret to “open source” its labelling procedures, and he’s tasked himself with building more momentum behind wider industry change. Because allergens are a “major public health risk” and Pret wasn’t “intrinsically weaker in this area” than any of its rivals. “Please don’t let it be that somebody else has to suffer the terrible tragedy that Natasha’s family did in order to make the point again,” he says.

It won’t be easy given the other challenges facing the foodservice market at the moment, but if anyone can convince the wider industry to change its ways and put consumers first, it’s Smith.