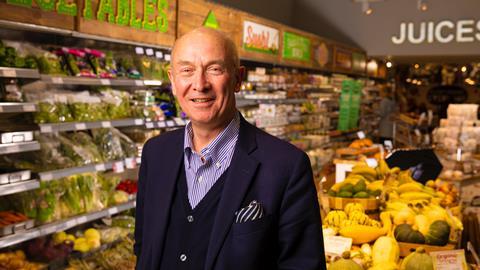 As the Planet Organic ethos enters the mainstream, Peter Marsh has ambitios growth plans, while also being determined to stay one step ahead of rivals

When Peter Marsh took the helm at Planet Organic in September 2008, the business was haemorrhaging cash and there were many weekends during the first few months when he went home not knowing whether the business would survive until Monday, the former M&S veteran admits.

Eleven years on, it’s a different story. Business is booming. Since 2014, the organic chain has enjoyed sales growth of at least 6% a year and has just opened a new store in Queen’s Park - the first of many, Marsh hopes. So how did he turn it around? And what are his plans for it now?

The starting point in the turnaround was closing the Fulham store, one of five in its estate at the time, because “the location wasn’t working”.

But the most important change was cultural. “We had to work very hard on people. It was all about people,” he says. “We spent the first 18 months sorting out people in as much as having systems, processes, contracts - a lot of due diligence was needed to create a team.”

From 2010 sales started to grow, and in 2011 it opened a store in Devonshire Square, followed by another in Wandsworth in 2013 and Tottenham Court Walk in 2015. But it didn’t have enough investment to open new stores at the rate he wanted it to.

“The existing investors didn’t particularly want to put more money into it, and we needed new investment in order to grow. We were spinning our wheels for a couple of years while we argued about what we wanted to do. But eventually we sorted it out, and here we are.”

To get the funding it needed, Planet Organic worked with Strand-based finance house Spayne Lindsay. “We had quite a lot of interest, both from venture capitalists and from existing retail businesses, but not all of them were prepared to put in a significant investment.”

Inverleith was. A specialist consumer brands investor, it bought a majority stake for £15m. And Planet Organic wants to add 10 more stores to its eight over four years.

All are in London, and Marsh plans to keep it that way for now. “We think we could [expand outside the capital], but the opportunities in London are clear, and the logistics and infrastructure is here. There’s a central kitchen above us, which makes daily fresh food for all eight stores. As soon as you go too far away, you have to start adding new logistics. For now, we can more than double the turnover just in London.”

And then? “At that point it may well be that we will need new investment. Because if we go outside London, we’re going to have to start setting up infrastructure elsewhere. That’ll be a reflection point.”

Planet does have an online business too, accounting for “a couple of million pounds” of the chain’s £35m sales, and unlike many in grocery, it’s profitable, he claims. “We have to do it, because it’s what customers want, but we have always said we are not going to lose money through e-commerce, so we don’t. It’s very tightly controlled. It’s not a huge contribution, but it’s not a loss. There’s probably room to expand it, but stores are our priority. We’ll come back to e-commerce, probably in about a year to 18 months.”

Planet Organic is also at the forefront of new food trends, and Marsh intends to keep it that way. “We have about 6,500-7,000 products in the store, of which roughly 30% are new every year. My little but beautiful [eight-person] buying team, travels all over the world and we are looking to keep this food emporium as interesting and as much of an adventure as possible.”

“If I was working for another food retailer in the UK, I’d definitely come and see what Planet Organic is doing”

He wants it to set an example to the rest of the industry, too. “Many of the things other people do, we have been doing for a long time.”

A case in point is its ‘Unpackaged’ ambient food refill stations. The concept was developed by Catherine Conway, a zero waste pioneer, who opened her first packaging-free store as early as 2007. After her Hackney-based store ran into trouble, Marsh saw the potential and rescued it. “To keep it alive, we came up with an idea. She ran the brand within Planet Organic. We paid her to train our staff and set it up [as a concession], and gave her a commission on all the sales.” The first concession launched in 2015. There are now five.

Until a year ago, Marsh had an exclusivity deal with Conway, which meant that while she could open concessions in other farm shops (there are currently seven), she was not allowed to work with supermarkets. However, “it got to a point about a year ago where I was clearly going to limit her business if I stuck to the agreement, so I conceded”. Conway has since gone on to work with Waitrose on its ‘Unpacked’ trial, launched in May.

“In a way it’s flattering. We are the go-to place for food trends, and are visited a lot by everyone, from Holland & Barrett to M&S,” says Marsh. “If I was working for another food retailer in the UK, I’d definitely come and see what Planet Organic is doing.”

One thing Marsh is particularly proud of is Planet Organic’s plastic-free packaging, made from eucalyptus clippings and corn. It breaks down in a few weeks without leaving any toxic residue, and without the need for extra industrial processes. It has almost completed the process of transferring all its store cupboard lines. “I’m sure there’ll be a press release from one of the major grocers in the next year saying they’re the first to do plastic-free packaging,” Marsh jokes. “It’s a very challenging area. I’m definitely not claiming we are expert at everything, but we are getting there.”

Another area in which it’s been pioneering is on the health and wellbeing side. In 2014, Marsh’s buying team returned from a trip to California insisting kombucha was the next big thing. So, “we curated the best kombucha range you can find”, says Marsh. “We have a dozen brands in the chiller including the number one American brand - GT’s - which launched in the UK last week, in our Westbourne Grove store.”

When it comes to health, Marsh warns rivals will “have to think”, because “there are a lot of product ranges which people invest a lot of time in that are not inherently good for them”. One is ready meals. “We sell very few ready meals because our buying criteria are very strict. There’s no added anything.”

This plus sustainable packaging, he warns, are “two big headaches the grocery industry is going to have to address”. “I don’t think they’re particularly well set up to do that. The innovation needs to be a lot quicker.”

Pets: I borrow my son’s miniature schnauzer for walks

Potted CV: Marks & Spencer including Brooks Brothers in the US, Confetti.co.uk, Signet and Planet Organic

Worst career decision: Going back to corporate from SME

Business idols: All the foodie startup entrepreneurs I meet

Best piece of advice, given or received: Really get to know your customer

Hobbies: Reading the Sunday newspapers - it takes me all week