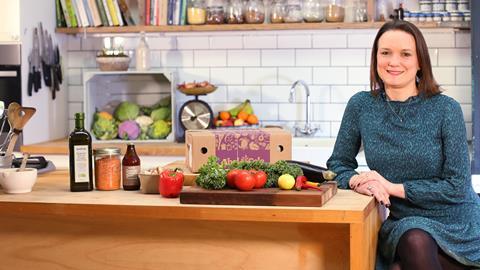 For too long, Abel & Cole has only been known for its fresh produce boxes, says MD Hannah Shipton. She’s on a mission to change that with ‘bold’ claims

Abel & Cole suffers from a shyness problem. At least according to its MD of three-and-a-half years, Hannah Shipton. She wants the brand to start “blowing our own trumpet”. By that, she means shouting about what it offers beyond fruit & veg boxes. “We have got a job to do in terms of educating people that we are more than that,” she says.

Indeed, Shipton says “you could pretty much do your weekly shop” with Abel & Cole, which sells a range of 2,600 grocery SKUs.

Yet, as she suggests, there is clearly a sizeable education job to do. Around half of its sales still come from fruit & veg boxes. And total sales have been on a downward trajectory since 2015, when it turned over £73.5m - falling to £60.3m in 2019. “The market has definitely become more competitive,” says Shipton.

That is what has prompted her current determination to make “bolder claims”. When Shipton took the helm of Abel & Cole back in 2016, after 10 years in the customer services division, the strategy was very much about new customer acquisition. The business had gone through a period of rapid growth and felt “pretty chaotic” . “I instantly felt I could add value,” she recalls. She decided to change tack. Shipton reduced the relentless focus on drumming up new business in favour of increasing spend among existing customers.

It could have been a risky strategy - especially as rival recipe box services continued to spend big bucks on marketing. But Shipton is proud to say Abel & Cole has recovered from the long-running decline in sales. “This year we are back in growth,” she says, “and that is very much coming from our active customer base and growing customer spend and loyalty.”

Developing Abel & Cole’s range and using technology to sell it better have been key to this “real success”, she says. There has been a slow but steady focus on introducing “more depth to existing categories” alongside offering new categories, such as flowers, petcare and babycare. Although Shipton is keen to stress that fruit & veg boxes remain a “hugely important” part of the business, she is pleased to see more customers exploring new areas of its proposition.

Technology has played a significant role in this evolution. Abel & Cole has started using personalisation on its website and email marketing “to ensure that we are showing our customers the products that are of the most use to them”. It is also in the process of developing an app for customers, which Shipton expects to launch in April or May.

Underpinning all of this progress, though, is an unwavering focus on the founding principles of Abel & Cole. Sustainability is a key tenet of the business - as shown by its registered B Corp status.

Until now, that has held the business back somewhat, admits Shipton. There has been a constant fear that “people will call us out on the things we say and do”. Now Shipton is confident “we do have the substance to back it up”. “We truly are offering a more ethical way to shop and eat,” she stresses.

That aim is evident in its latest initiatives, which tie in with its eco-friendly ethos. Earlier this month, the retailer launched Club Zero, a service that delivers a range of 13 pantry items in returnable, reusable pots nicknamed ‘VIPS’ (‘very important pots’). It is being trialled among 300 customers, with a plan to roll the service out to all 60,000 by the end of February.

The business has also ploughed “significant investment” into its B2B subsidiary startup - Fed by Abel & Cole - which launched last June with a range of 250 SKUs. “We talk about it as a startup because we have given it its own office in London, and its own team of 14 people,” says Shipton. It’s also got its own website, systems, and distribution hub from which e-cargo bikes deliver the goods.

The sustainable element of the operation seems to be striking a chord. “It’s zero-emission last-mile delivery, organic food, considerably less packaging, it ticks a lot of wellbeing and health boxes as well for offices,” she says. “People are responding really well, we’ve got some really interesting customers shopping with us - both big and small.”

The response has been enough for Shipton to consider a wider rollout. “For now, it’s just in London, but it could go in many directions and, hopefully, to many other cities,” she says.

The MD credits Abel & Cole’s parent company - William Jackson Food Group, which took ownership from founder Keith Abel in 2012 - for supporting this kind of experimentation. Rather than maintaining the status quo, they have been keen for Abel & Cole to differentiate itself. “They’ve offered real security, stability and investment,” she says. “And as family-owned businesses we share a lot of similar values. They recognise we are unique and they’re keen that we protect that.”

That last point is particularly crucial to Shipton. To compete in an ever tougher market, she believes Abel & Cole must continue to keep a keen eye on “unique products that give it a point of difference”.

“Abel & Cole is at its best when we are behaving differently from the supermarkets,” she stresses. “Maintaining that point of difference is really important, so I want to make sure I keep us on the right track and not let us drift back to the middle.

“Making sure we are staying true to our values, truly picking the most sustainable route, and trying to take ourselves forward in that regard, is really important. It’s one of the most important roles I play.”

Best career decision: Moving to Abel & Cole. It has provided me with so much opportunity.

Worst career decision: I’m pretty positive and everything has felt like a step in the right direction, so far.

Business mantra: Do the right thing and good things will follow.

Hobbies: Spending time with my children; cooking for friends & family; and I’m about to start training for The MoonWalk.

Desert island meal: Roast chicken with all the trimmings.