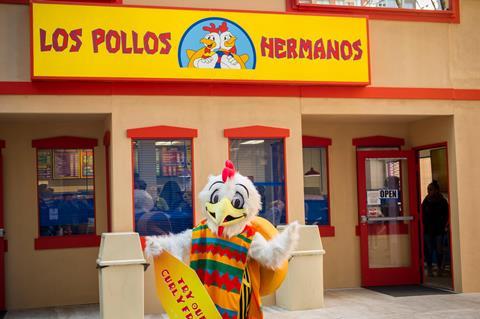 Do you ever wonder about the viability of fictional food businesses in TV and film? Of course you do!

Wonder no more. Food box maestro Gousto has been investigating which fictional foodie franchises would (and wouldn’t) succeed in the real world. Using ‘real life’ counterparts as instructive examples, Gousto calculated the chances of 20 cafés, pubs and restaurants.

And? Apparently Los Pollos Hermanos, the chicken franchise beloved of Breaking Bad meth impresario Walter White and his pals, is most likely to succeed. But it’s bad news for The Winchester – the boozer in Shaun of the Dead – which would fail even without the zombification of most of its regulars.

Gousto also reckons Friends’ Central Perk, American Psycho’s Dorsia and Ratatouille’s Gusteau would tie for top Trip Advisor review (a galling result for the two eateries that don’t employ a rat, there). It also says American diners like Parks & Recreation’s JJ’s trade in the ‘most successful’ cuisine, though that’s hardly a surprise, considering the survey mostly covers US establishments.

So what can we learn from all this? “Our study shows that there’s no one clear ‘recipe for success’,” according to Gousto’s food development director Rachel Chatterton. “It’s much more complex than that and takes into account a number of factors.” Oh. Never mind!