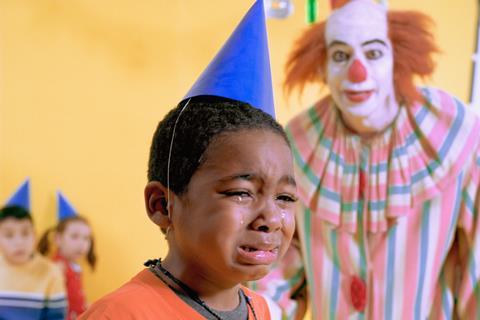 The bright minds at Burger King have been busy recently, coming up with a couple of campaigns based on its rivalry with McDonald’s.

In the US, BK has taken on the might of the Maccy D’s Happy Meal, with a smart-aleck range of ‘Real Meals’ – because, it says, no one is happy all the time. Instead it offers a lineup based on the well-known emotions ‘Pissed’, ‘Blue’, ‘Salty’, ‘YAAAS’ and ‘IDGAF’ (in English: angry, sad, passive-aggressive, excited and, ahem, beyond giving a monkey’s).

If this seems a little, er, salty, then it’s not really – the idea is to raise the profile of Mental Health Awareness Month. Nice!

The actual snark comes courtesy of BK’s Israeli operation, which is taking aim at mascot Ronald McDonald (who you don’t see much of these days, though that doesn’t necessarily make him any less sinister). A poster campaign shows various children posing for photos with clowns – and bawling with fear. ‘Burgers should be happy’, the posters claim (revealing a lack of internationally joined-up thinking), reminding burger fans they can ‘book a clown-free party’.

McDonald’s must feel so flattered by all this attention!