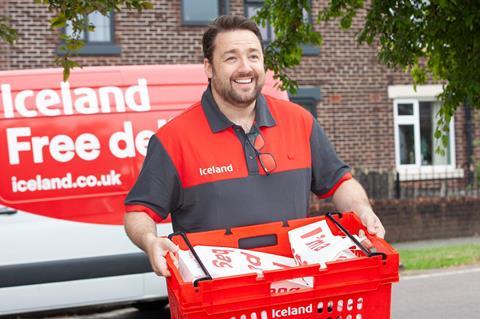 Manford for the job: Jason drops off some frozen goodies

Lockdown has seen many actors, musicians and comedians return to ‘normal’ work, seeing as they can’t do what they do on stages right now.

It was still a surprise to see comedian Jason Manford on the delivery trail for Iceland last week, however. But the comic, who has also done a lockdown stint ferrying OAPs for a charity, is keeping busy. Having been turned down for a job at Tesco, Manford was more successful with its frozen rival, and spent the day doing deliveries – to some surprised customers.

Manford also dropped off a delivery at food charity The Bread & Butter Thing in Manchester – one of two charities to which he asked Iceland to donate his ‘wages’. He even stopped to hand out PPE to people helping a man who’d been knocked off his bike! What a hero.

So, it turns out comedians make good supermarket workers. Iceland should definitely stick to the day job, though. “Just call him Jason Van-ford,” the supermarket waggishly posted on Facebook. Groan.