My Week… by Colonel Sanders (as told to Bill Tush) 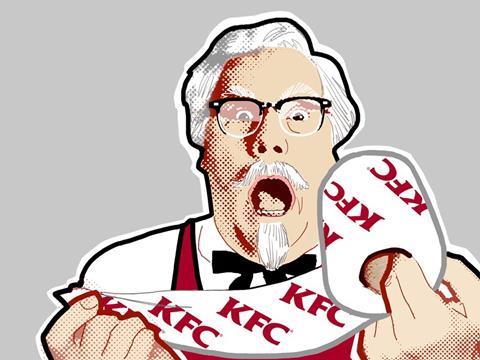 Well, shut my durn mouth! First it was rats in the chicken. Now they’ve gone and found somethin’ not very nice in the ice at one of mah little ol’ KFCs, at Martineau Place in Birming-ham!

Now I know what y’all are thinking. Not for nothing is mah company owned by Yum! Brands.

So soon as I heard they were sellin’ Kentucky Faecal Coliforms from one of our ‘finger-lickin’ outlets, I went on down to Birming-ham to interrogate - and what did I find there? Diddly sh*t! (Well, how was I to know there was a Birming-ham in little ole England?)

But I’m on my way over right now to Rip Off Britain to rip off some heads. And not just on them chickens. Cos you can bet your bottom dollar there ain’t no facultatively anaerobic, rod-shaped, gram-negative, non-sporulatin’ bacteria mentioned nowhere in the Colonel’s secret blend o’ herbs and spices! Not one.

There ain’t nothin’ secret about our ice recipe either. Or so ah thought.

So, we’ve pulled out all the stops. We’re thinkin’ o’ introducin’ voluntary hand washing at some of our restaurants followin’ bathroom breaks - subjec’ to availability o’ water of course.

An’ let me remind you that them thar urban myths about Kentucky Fried Rat were all made up by some varmint with a bucket load’a rats to sell. The occasional caterpillar (Plymouth), mouse (Leicester Square) or rat (Belfast) that may find itself adjacent to our food is gonna have a deep an’ meaningful conversation with my Colt 45. I’ll stake mah reputation as a Kentucky Colonel on that.

Although, truth be told, I ain’t a real Colonel neither.