My Week, by Mel (Checkout 11) as told to Bill Tush 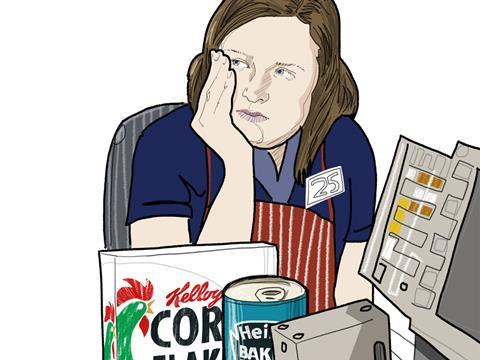 Some middle-aged man came in last night, bought some Special Brew on deal and offered me £50 to write “something funny about supermarkets”. He said he worked for The Grocer. Well, I’ve never done this before but I need the money to get the washing machine fixed. So here goes.

I can’t say I love this job, but I do the hours I can. I’ve asked for some extra shifts next week but Keith says they’re cutting back. I’m only contracted for 18 hours; I used to pick up extra at weekends but they’ve cut back on that too.

It’s not so bad here. Most of the customers are OK, but some of them treat you like dirt. You sometimes get the feeling that just putting the uniform on makes you invisible. Like when they talk about shelf-stackers in the papers. It’s as if we aren’t real people at all.

I like this checkout because you can’t see the clock. The best way to make time pass is not to think about it. I don’t really take breaks; it helps me get off early to pick the kids up and, well, there usually isn’t any relief anyway. There’s always someone who calls in sick. I can’t take time off like that, we wouldn’t get by.

I saw they’re going to raise the minimum wage and call it something else. I worked out that with the extra I could maybe take the kids on a week’s holiday next year, but Keith says they’ll have to cut hours to pay for it all.

The chief executive was in a few weeks ago. They interviewed him for the papers, asked him why he earns a million or whatever and then we chatted while they took pictures of him pretending to buy stuff. He looked quite surprised when I told him I also worked nights as a nurse. That was funny, sort of.