My Week… by Rakesh Kapoor (as told to Bill Tush) 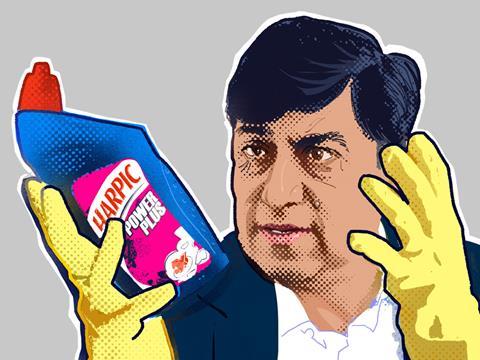 Whereas I am worth considerably more than that. My modest £23m pay packet this year will get you about 825kg of the shiny stuff at current prices. “Au”-some, as we chemical engineers like to quip. Haha.

In all humility, I will claim sole credit for the rise in Reckitt Benckiser’s fortunes, which has made my reward not only justified, but contractually mandatory. For example, you may know about my ban on business class flights for staff - as always I set an example by denying myself the window seat on the Gulfstream.

So I don’t hear shareholders complaining, though this may be due the sheer thickness of the walls of my London postcode, where I like to spend my evenings carrying out hands-on testing on some of RB’s top-selling products.

In keeping with the company mantra of a Healthy Life and a Happy Home, I prefer to do this wearing rubber protection - Harpic can bring tears to the eyes if wrongly applied. We still haven’t got over that little mix-up at the printers after I merged the divisions - I can assure you K-Y Jelly is a particularly poor substitute for Cillit Bang. And vice versa. Took more than a couple of Nurofen to sort that little headache out.

Where was I? Oh yes, money. Well, without dropping names, just the other day I was trying to persuade my namesake Sir Anish to stop knocking bits off lumps of stone in the name of art and get a proper job. He may have a fancy title but what he does isn’t proper work, like marketing Strepsils, is it?