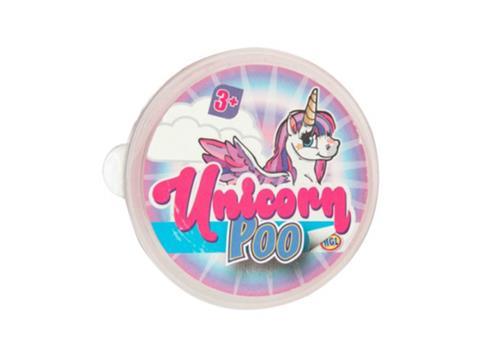 To mark the occasion of Unicorn Day (9 April) those busy bees at Poundland have written to a palaeontologist at a Russian university asking him to ‘verify our £1 unicorn poo’.

The letter concerns the retailer’s actual ‘Unicorn Poo With Glitter’ product, which is described as ‘pink, glittery, slimy and only £1… no myth’ - though it’s not clear what it’s for.

It is addressed to Andrey Shpanski, a Tomsk State University expert on the extinct elasmotherium, also known as the Siberian unicorn - which according to artists’ impressions looks less like Twilight Sparkle and more like an angry, stunted rhinoceros. 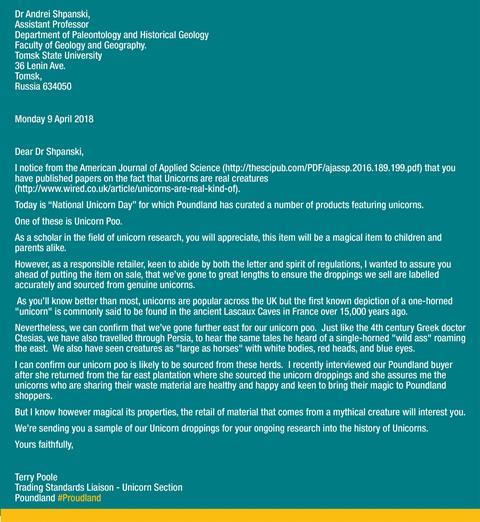 ‘I notice from the American Journal of Applied Science that you have published papers on the fact that unicorns are real creatures,’ says the letter, from Poundland top wag Terry Poole, who signs off as ‘Trading standards liaison - unicorn section’.

The letter explains at length that a buyer travelled ‘through Persia’ to see herds of ‘single-horned’ creatures as ‘large as horses’.

‘We’re sending you a sample of our unicorn droppings for your ongoing research,’ it says.

The post appears to have been well received on Twitter, with one user calling it ‘top trolling’.

Hopefully Shpanski will appreciate the gag, too - he should at least count himself lucky not to receive correspondence from the discounter’s ‘controversial’ bantz elf.