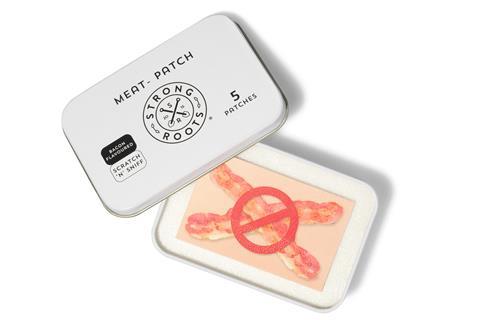 Veganuary is over, and while some will be joyfully jumping off the meat wagon, others will be determined to keep avoiding animal products.

Plant-based brand Strong Roots has unleashed the boffins on this subject. Its study of 2,000 adults found that one in six believed giving up meat was harder than quitting fags or booze, with a pathetic 33% claiming they “cannot make it through the day” without chowing down on some flesh.

However, the report also detailed rising levels of meat guilt (36%) and desire to eat less of it (43%). In order to ‘help’ such folk, Strong Roots has come up with a ‘meat patch’. Modelled on nicotine patches, these stick-on stinkers release a bacon scent, designed apparently to make the wearer believe they’ve already eaten some.

It’s not as mad as it sounds – Bogof’s favourite scientist Professor Charles Spence references “sensory-specific satiety” and “embodied mental simulation” – but it is a high-risk strategy: if you already reek of bacon, why not eat some?