Breakfast’s biggest brands have tightened their belts over the past year, cutting spend on traditional ad space by 7.8% to £34.2m, according to Ebiquity [52 w/e 30 June 2015].

Meanwhile, Kellogg’s has splashed out on ads featuring a range of its cereals, nearly tripling spend to £3.7m. This has meant a reduction in spend for core brands including Special K (-26.3%) and Crunchy Nut (-12.2%).

“Kellogg’s is one of the UK’s most trusted brands, and as such we’ve been focusing on advertising the wider Kellogg’s portfolio as well as our core brands,” says Alison O’Brien, Kellogg’s commercial strategy director.

“We want consumers to associate Kellogg’s with a wide, balanced choice of breakfast cereals. We know that our See You At Breakfast banner is working to do this.”

The campaign highlights the nutritional content of its cereals, drawing attention to the calcium, protein, vitamin C and D, and grain content. Not all Kellogg’s brands have had budgets cut to make way for a more inclusive strategy – notable increases were seen by Rice Krispies and Krave.

Weetabix also upped spend on breakfast drink Weetabix On The Go by 61.1% while reducing spend on its cereals.

Here’s our pick of the most significant breakfast ads on TV from the past year:

Weetabix On The Go

Who has time for breakfast in the morning? The handsome chap in the ad certainly doesn’t as he rushes to his morning meeting (clearly he didn’t realise croissants and orange juice would be served). The ad taps into the increasing trend of grabbing breakfast on the go and is keen to highlight the nutritional content to appease all those naysayers who say a drink isn’t sufficient for breakfast. It seems to be working – sales of Weetabix on the Go are up 139.7% [IRI 52 w/e 18 July 2015]. Weetabix makes a point of highlighting the nutritional content too.

Real men eat biscuits for breakfast. Up until now, breakfast biscuits have had a fairly feminine image (the previous incarnation of Belvita’s ad saw Lisa Snowdon munching them while Johnny Vaughn tucked into a manly sausage and egg butty). Belvita is looking to change that with its Morning Win campaign. Sure, there’s a female equivalent of the ad but Ed’s morning win shows that even a ‘proper man’ can enjoy biscuits for breakfast. Whether blokes have been convinced by the ads is not clear, but the brand is doing something right – it’s added an extra £8.8m to sales [IRI].

A great ad, but a 12.2% cut in ad space spend and a decline in sales seems to suggest it just didn’t get enough airtime. The ad tapped into the dino fever sweeping the nation ahead of the release of blockbuster Jurassic World and continued the classic Crunchy Nut theme with the tagline ‘The trouble is they taste too good’. 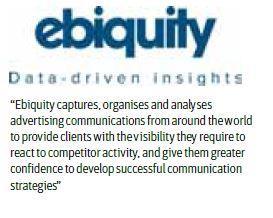