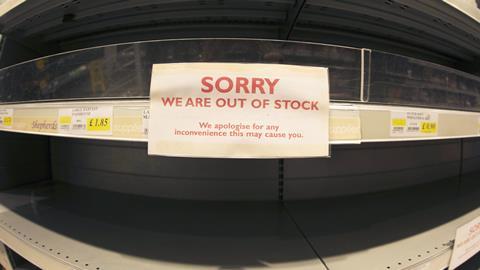 Are crisis communications teams in food and drink ready for the Brexit fallout?

How can communications teams prepare for the Brexit fallout? Plus: take part in our survey

Food and drink is no stranger to a crisis. But when it comes to Brexit - arguably the biggest potential crisis the industry has faced since the Second World War - are comms teams prepared?

Consumers can be remarkably unforgiving after all, as the High Stakes Leadership survey, published by comms agency Hotwire, revealed in March. Some 82% said they would consider ditching a brand that handled a high stakes issue in a way that violated their values.

Business partners can be even more brutal, with 24% ­surveyed prepared to end a relationship in less than a day if a crisis is handled poorly.

Do you work in grocery PR/comms? Take part in our survey

So despite the uncertainty and complexity around scenario planning “there is an expectation on companies to have thought and planned and done the thinking upfront,” believes Alex Johnson, consultant at Insignia Communications. “People aren’t going to tolerate companies that appear to be surprised by Brexit.”

It’s moot as to how much contingency planning the industry has done - or how well. But even in those companies that consider themselves well prepared, Charles Ansdell, managing partner at Newgate Communications, thinks many may not have thought about the communications side.

“In our experience companies tend to focus on the operational and financial aspects of business continuity, rather than reputation and communications.”

Adds Andrew Griffin, risk advisory partner at Deloitte: “A full-blown reputational threat needs a strategic response, including direction from senior leadership, input from across the business, and a strong communications team.”

While the climate of political stalemate may be frustrating, companies should use the time it provides wisely, believes Elin de Zoete, MD at PLMR. “Whilst these weeks of seemingly interminable votes continue in parliament, this is the perfect opportunity to do the heavy lifting work on the communications plan and agreed messages, so businesses can be fleet of foot and agile when things start to move,” she says.

“Take the time now to map all the internal and external stakeholders who will be impacted by your decisions around Brexit and ensure you have all their contact information ready to go in one place. Develop key messages for a range of possible scenarios, tailored to specific audiences, that you can get signed off in principle in advance. Agree who your key spokespeople are for which media and stakeholder groups and ensure there are means to reach them around the clock.”

Be prepared, but also be prepared to be flexible, adds Ansdell. “Identify potential risks, create a process, teams and messages for responding. These can then be documented in practical crisis manuals and scenario ‘playbooks’.”

Companies should also train teams - and their leaders - in these processes through crisis simulation exercises, he adds.

Though it may be tempting, simply blaming Brexit could prove risky. We’ve already seen it since the 2016 referendum, says Beattie Communications director Chris Gilmour. “Every time someone doesn’t invest, or makes a cut, or hikes a price they say it’s down to Brexit. Some of those explanations aren’t even credible.”

The danger of using Brexit as “an excuse for poor performance or price rises” is “people will absolutely see through it”, says Johnson.

Heightened scepticism over the wider handling of Brexit ensures people are more likely to see through spin that doesn’t ring true, but in an age of fake news even credible explanations can be angrily dismissed - another reason Brexit could turn out quite unlike any comms challenge that has come before.

Simulate scenarios. From a cliff-drop exit to a long delay, walk through the possibilities and consider the impact.

Mitigate the chaos of uncertainty now by sharing plans with stakeholders on a regular basis.

Don’t act alone. Think about how you can utilise the support of trade bodies and even competitors to address and communicate shared issues and threats.

Know your priority stakeholders. From checkout staff, to the production line, to suppliers and consumers, who needs to be told first and how?

Seize opportunities. Brexit will play to the strengths of some companies - they should develop optimistic narratives.