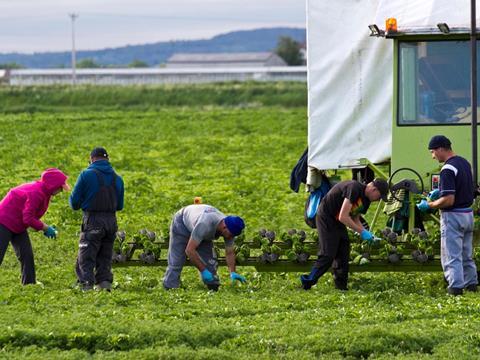 Uncertainty over the future of a seasonal agricultural workers scheme for non-EU citizens is “killing” the fruit & veg industry and will almost certainly lead to a shortage of labour this summer, industry insiders have warned.

Despite more than a year of campaigning by the sector, and the apparent support of environment secretary Michael Gove earlier this year, no further progress had been made in addressing the situation, said Derek Wilkinson, MD of asparagus grower Sandfields Farms.

“This is now a serious issue for the industry, and hampering investment decisions among growers,” Wilkinson added, with Sandfield parent G’s Group already trialling summer production of spring onions in Senegal as a result of labour shortages.

“We’ve given the government all the evidence they need. The question is when will it listen and will it wait until shelves are empty or until production is shifted overseas?”

A Defra spokeswoman told The Grocer the government was “giving consideration” to what replacement labour arrangements might be necessary after Brexit, and stressed growers would be free to recruit EU citizens until 2020.

But many EU workers were already looking elsewhere due the weak pound and better conditions in other countries, said John Hardman, director at recruitment agency Hops Labour Solutions. They would experience even more barriers such as the need to register from next year, he added, while there was no mechanism to attract replacement non-EU workers to the UK.

“The situation will have been exacerbated by a late start to the spring, which had seen some labourers forced to look elsewhere for work, and I suspect we will start to see huge shortages of people as soon as harvesting picks up in June,” he warned.

“For soft fruit in particular, this season looks like it will be all-or-nothing, as crops come to harvest at the same time, and we will need lots of people to pick it, which will be a challenge,” Hardman said.

“We need a SAWS now, you can’t just start it up again with no notice, systems need to be put in place,” he warned, while also noting a lack of communication between Defra and the Home Office.

“I can see another season with huge potential shortages, and if we don’t have crops rotting in the fields this year I’d be very surprised.”

Read next: Why are so few Brits prepared to pick fruit?

Failure to address the labour situation represented a political decision by a government that did not want to address the topic of immigration before Brexit, suggested English Apples & Pears CEO Ali Capper.

“We are deeply concerned about the labour situation this year. September will be a crucial month for us.”

Capper feared last year’s average 29% shortfall in agriculture vacancies would increase further unless the government took action now. “If we start to see shortages in July and August it will be too late to act for this year’s harvest.” The government was “not dealing with the issue”, added Angus Soft Fruits MD Lochy Porter.

“We’re very frustrated at the slow pace of things, and there is still no timescale on the creation of SAWS,” he said. “We have to make sure people are encouraged to come and work here. It’s a huge concern, without seasonal labour, we wouldn’t have an industry.”