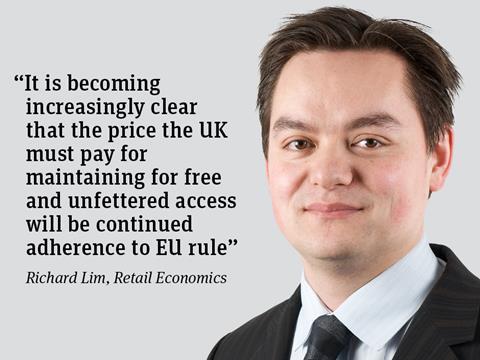 The agreement reached on 8 December on phase 1 of the Brexit negotiations has been met with a huge sigh of relief in many quarters. It represents progress on one or two issues of concern to the food supply chain, but more significantly it sets a direction for the next phase of negotiations towards the ‘free and frictionless’ trade UK businesses want. Though this will come at a cost.

For UK food, the biggest Brexit fear is that it will lead to higher costs and more red tape on food and drink traded with the EU. UK retailers have calculated the ‘cliff-edge’ would mean an average tariff of over 20% on food and drink imported from the EU.

The ‘phase 1’ Brexit agreement addresses directly some of those concerns. Specifically, the commitment within the agreement to avoid at any cost a hard border between Northern Ireland and the Republic of Ireland means time-consuming physical checks have been definitively ruled out.

The beef and dairy industry on the island of Ireland will be a clear beneficiary of this agreement because it should now avoid the introduction of veterinary checks at the border on trade in animal products. Another consequence of the phase 1 agreement is that import duties will not be collected at the Irish border. The phase 1 agreement is not itself a trade deal and it does not abolish tariffs on Northern Ireland/Republic of Ireland trade, it simply requires that if customs duties are due they must not be collected at the border. However, there are no obvious alternatives for enforcing collection.

The government might hope this issue will simply disappear in phase 2 of the negotiations through a free trade deal where both sides agree not to apply duties to the other’s trade. The logic here is that if there are no duties due, then there is no need for the physical infrastructure and checks associated with their collection.

However, even if the UK and the EU agree not to apply any tariffs to each other’s trade, there will still be other trade issues to sort out before physical checks can become redundant. The most challenging of these is likely to involve goods imported to the UK from overseas and then moved on to the EU via the Irish land border. For example, currently the EU applies a standard duty rate of 16% on imports of oranges. When the UK leaves the EU it might reduce its tariff rate on oranges or strike a trade deal with another country that includes reducing tariffs on oranges. What happens then when they are imported into the UK at these reduced rates and then trucked to the Republic of Ireland via Northern Ireland?

The UK will probably not be able to argue that this will only ever be a small, isolated issue. The EU will demand that the final arrangements respect the integrity of the EU single market and customs union. The most effective way of ensuring that the relevant rate of duty has been paid would be for the UK and the EU to apply a common tariff to imports from outside - in other words a de facto customs union, which the government has so far ruled out.

The phase 1 agreement makes clear that if the UK cannot bring forward acceptable proposals then it will be required to align with all of the EU’s single market and customs union rules that are necessary to enable the Irish open border. So though the phase 1 agreement does not actually bind the UK to the EU’s customs union and the single market, it does make these the default destination should the two sides fail to agree an alternative outcome.

Overall the agreement makes repeated links between openness to trade and continued alignment with EU rules, and this is a link that is bound to recur in the second phase of negotiations. In some areas like veterinary controls this is should be unproblematic, but in areas like trade policy it will be much more difficult for the government to agree.

For the food supply chain, the agreement should encourage those who depend upon free and unfettered trade with the EU. However, it is becoming increasingly clear that the price the UK must pay for this will be continued adherence to EU rules. This will be less welcome news to those in the supply chain who want to be free of EU regulation or who want to develop new commercial relations outside the EU. To them it may seem that Brexit is like Hotel California; you can check out any time you like, but you can never leave.