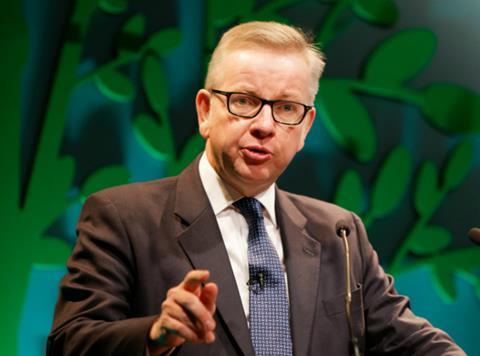 Speaking at the Oxford Farming Conference today (3 January), the Defra chief told delegates small farmers would be hit hardest by a no-deal Brexit.

MPs who planned to vote down Theresa May’s deal would put at risk an agreement that allowed the UK to move away from EU regulation and the Common Agricultural Policy, in addition to ending mandatory payments to the bloc, he said.

While acknowledging the prime minister’s deal was not perfect, he urged MPs not to “make perfect the enemy of good” and force food producers to trade on WTO terms, which could see 11% tariffs imposed on some agricultural goods.

He stressed meat exports would be worst hit by minimum tariffs of 40% imposed on beef and lamb exports, far outweighing the impact of fluctuations in currency. “Ninety per cent of our meat exports go through the EU,” he said.

“While the EU has pledged to expedite process where UK is recognised as a third country and can trade freely with the union, in the meantime 100% of products will be subject to sanitary and phytosanitary checks on entry. Currently, there are no checking stations at Calais and there are unlikely to be any there before March.”

He also sought to reassure delegates over the future of food security, telling the assembly Defra was working on a number of mitigation strategies to safeguard British food production for the long term. His department was working to maintain a “diversity in both the size and type of farm” to provide plentiful affordable food for the UK, he said.

However, the percentage of supermarket shelf price paid back to the primary producer had fallen with the rise of added value, Gove told the conference. He called on farmers to embrace the advance of robotics and artificial intelligence to claw back vital profits, after 50% of primary producers earned less than £20,000 last year.

Championing British food was key to Defra’s strategy to safeguard British food and farming, in addition to the environment, Gove told the conference.

“Beef or soybeans produced to scale on land in other countries that have been cleared of vast hectares of forests may appear cheap, but in fact such food is costing the earth,” he said. “Importing from countries that have pursued deforestation policies ignores the fact that we all have to pay for the environmental damage in other ways.”

NFU president Minette Batters welcomed Gove’s sentiments but challenged the environment secretary to take action to ensure all food imports brought into the UK were produced to British standards. “If you believe it, write it, legislate it,” she told him.