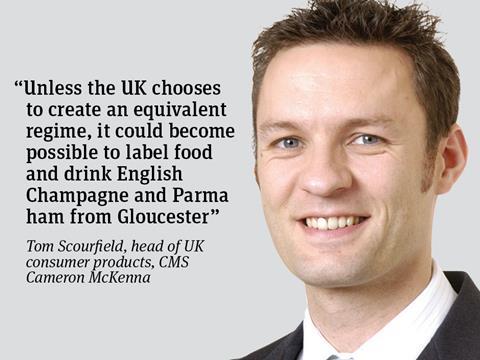 The current food labelling regime is a patchwork of EU regulations, UK legislation and case law from both EU and UK courts. What will be the fate of this complicated area of law when the UK leaves the EU?

Some of the most fundamental parts of food labelling legislation are EU regulations. For example Regulation 1169/2011 provides a general framework and governs matters such as ingredients lists and allergens, while 510/2006 regulates PGIs and PDOs.

There are also specific EU regulations that deal with certain categories of food, for example organic or fresh meat. In addition to EU law there is also UK legislation - the Food Safety Act 1990, which requires that food packaging must not be misleading. Our interpretation of the entire food labelling regime is informed by UK and EU case law, which for example directs how we interpret ‘misleading’ for the purposes of pictures on packaging.

To ensure consistency across member states the trend in recent years has been for the EU to legislate via regulations (rather than directives) for food labelling. Directives simply instruct states to create legislation. In contrast, regulations are directly effective. In principle, there is no need for a state to legislate. However, for the purposes of food labelling the UK has chosen to transpose many food labelling regulations directly into UK law in the form of statutory instruments.

Once the UK leaves the EU, the statutory instruments will continue to be obligatory. What would change is that the UK parliament would gain the ability to modify them. One area where there is potential for a significant change is the PGI/PDO regime. There is no statutory instrument for this regime. Therefore, unless the UK chooses to create an equivalent regime, it could become possible to label food and drink English Champagne and Parma ham from Gloucester.

Whether the regulations fall away will depend on what model the UK chooses to adopt. One of the potential options would be to become a European Free Trade Association (EFTA) state. Under this arrangement, EU legislation on certain topics is reviewed and incorporated into national law as appropriate. Food labelling legislation is included in this - but the PGI/PDO regime is not. If the UK chooses to become an EFTA state then parliament may still not have sovereignty over much of the labelling regime. What is more likely to change if the UK becomes an EFTA state is enforcement. At the moment any company or government body can sue through the English courts to enforce EU law. However, the Court of Justice of the EU (CJEU) is the final arbiter. Parties can appeal to the CJEU on matters of EU law. When the UK leaves the EU the CJEU will lose its place in the English legal system. But EFTA states have their own court, and English courts would be able to refer questions to it - though unlike the CJEU, EFTA court rulings are not legally binding.

Thus, when the UK leaves the EU English case law could start to diverge from EU case law. If the UK joins EFTA we could indeed end up with the same regulatory regime but applied in a subtly different way.