Progress made on Brexit must continue at pace in 2018 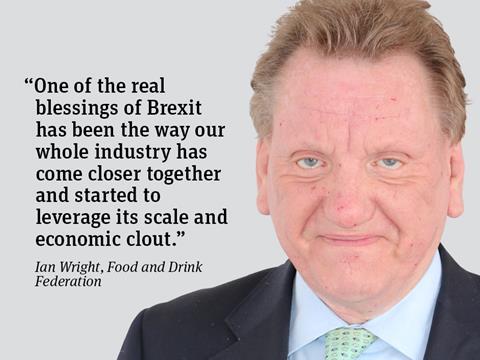 I hope one positive memory of 2017 will be that it was the year the government finally agreed to establish a food & drink sector council. It is a collective achievement, but I’m very proud of the role FDF played in making the case. It presents us with a fantastic opportunity to move the UK’s largest manufacturing sector right into the heart of government thinking.

Reflecting on the year, I look back with pride on our work on EU citizens’ rights. We now have confirmation government will create a simple online registration system - at reasonable cost - that our valued EU colleagues can use to secure settled status. It will be available from the middle of next year. If you are an employer of EU citizens I urge you to help them take advantage of it.

FDF has long stressed the importance of the Ireland/Northern Ireland border to food & drink manufacturers on both sides of the Irish Sea. We included the issue in our July 2016 manifesto and have worked tirelessly since, alongside Michael Bell at the Northern Ireland Food & Drink Association and Paul Kelly at Food & Drink Industry Ireland, to ensure it didn’t get overlooked. While there remain some very difficult problems to resolve, it is very heartening that the UK, Republic of Ireland and EU have agreed some clear principles.

This year will also be remembered for a general election that promised a strong and stable government to manage Brexit - and failed to deliver it. I know industry’s calls for clarity on future arrangements is irritating to some, but the world before June 2016 was full of certainty. What we hear about the world after March 2019 looks ethereal at best.

If it is true that trade talks with the EU will not start until March 2018, and must be concluded by October, that looks like a terrifyingly tight timetable. Business needs to know, within weeks of the turn of the year, that the status quo will prevail at 11.01pm on 29 March 2019 and that it will continue for as long as it takes to get everything ready for the new settlement outside the EU.

I now see three stages in our exit: a period of ‘standstill’ from March 2019; a period of transition from the status quo to the new relationship with the EU (once that is clear) and then a period for the new arrangements to bed down and be de-bugged. Again, I know this seems ponderous to some, but no one wants empty supermarket shelves and reduced choice. Nor do we want food and drink manufacturers to shelve investment or relocate production away from the UK.

A new sector council for food & drink would be welcome at any time, but given the challenges we face from Brexit and the public health agenda, it will be critical. We need to move fast in the new year, to establish it and make swift progress in its work.

I hope an industrial strategy sector deal for food & drink manufacturing, with skills, innovation and exports at the heart, will be finalised next year. A deal for the wider ‘farm to fork’ industry isn’t far behind. A blessing of Brexit has been the way our industry has come together and started to leverage its scale and economic clout. That can help us to seize new opportunities and absorb shocks in 2018.

Ian Wright is director general of the FDF