Ranjit Singh Boparan says: we must stay in EU 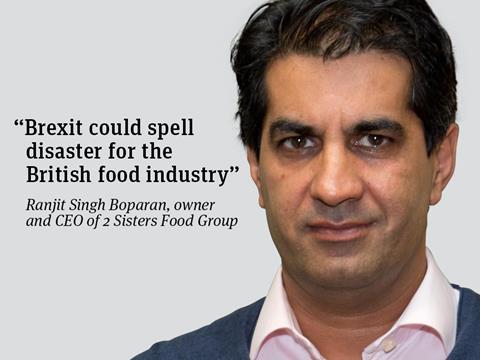 The UK needs to stay in Europe.

There have been times in my 23 years in the food industry where I’ve taken calculated risks. That’s part of what building a successful business is all about. One of the biggest risks I have faced in my business in those 23 years is the prospect of leaving Europe. And I believe we should not take that risk. Brexit could spell disaster for the British food industry.

This is about certainty versus uncertainty. And if Brexit brings reduced consumer spending, higher interest rates and potentially higher cost of goods, as many experts predict, this could decimate my industry. Also, I don’t want to see millions of working class people burdened with the prospect of higher costs of living, more expensive holidays and less cash in their pockets.

Food and drink is one of the UK’s biggest employers - it provides jobs for three million workers, and a third of the workforce in food manufacturing is made up of people from the EU states, according to ONS. We couldn’t operate without these people.

I am proud that 2 Sisters represents Europe working together. Almost 6,000 of my colleagues come from 20 different EU states.

The end of free movement could mean new migrants facing the same border controls as those from non-EU countries. And that means changing our business model, which has big implications for our long-term future.

And what would exit mean for Scotland and my 2,000 colleagues that work there? Another referendum for independence and more uncertainty?

My business is also one of the biggest customers of UK farmers. The NFU has been clear that we are best served in the EU. It’s also why businesses across the country are sounding the warnings about us walking away.

British farmers and other food producers rely on the single market. It gives them access to 500 million customers, allowing goods and services to be sold on an unrestricted basis. Leaving the EU, but remaining in the single market, would see us following the rules set by the EU but with no say over them. That is madness.

Food manufacturing is tough enough as it is. We are a highly labour-intensive, high-volume business producing very low cost products for low margins, and operating in a deflationary market. Up against this, making things a success is hard. Very hard.

The pound has already dropped in value at the thought of an exit, and it is predicted to fall even more if we do leave.

There is a risk our ingredients and packaging costs will increase and it’ll be much harder to sell them in the UK and keep businesses viable.

2 Sisters is defined by Europe - its people, its products and its future success.

If the vote is out, the uncertainty could tip some food businesses over the edge, adding to the 167 UK food companies that have already gone out of business in 2016 because of the challenges we face.

My instinct says staying, fighting and being at the centre is where you win the game.