US trade deal will create 'trouble for trade' with EU 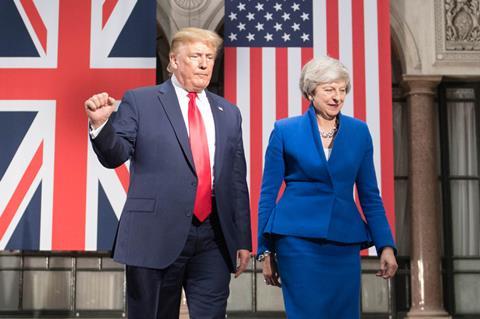 A US trade deal would destroy the UK’s chances of maintaining current trade levels with the EU after Brexit, the former deputy director of the European Commission’s agriculture department has warned.

It was also highly unlikely the UK’s next prime minister would be to able make significant alterations to its Brexit withdrawal deal, said Lars Hoelgaard, at the British Meat Processors Association’s annual conference in London on Wednesday.

He dismissed suggestions the UK could substitute the EU market with the US and other third countries such as India as “rubbish” and warned the idea Britain could forge a free trade agreement with the US, while also expecting to retain the same access to EU markets, was “one of the biggest lies of all”.

Speaking a day after US president Donald Trump promised the UK a “phenomenal trade deal” that could double or triple UK-US trade flows, Hoelgaard said pursuing such an agreement would inevitably lead to “divergent standards”, and invited “trouble for trade” with the EU.

“If you choose to go down that road that’s fine,” he later told The Grocer. “You can have your own standards and develop these, but you need to know what the price is.”

However, Hoelgaard’s claims that America had  “not been very good on the animal health side” prompted angry head shaking by Bill Westman, senior VP of international affairs at the North American Meat Institute.

Westman insisted the US would “not force” products such as chlorinated chicken and hormone-treated beef on the UK market, and was open to supplying products that would meet current UK and EU regulations.

“We have different arrangements with many countries. It’s a negotiation, and there is already a hormone-free quota for US meat in the EU,” he said.

“We don’t want to impose our system on you, but if the science is strong, don’t restrict trade because of that. We use chlorine washing as an intervention to enhance food safety, not to cover anything up.”

Hoelgaard did admit that despite the EU’s rigidity on regulatory alignment, the bloc would ultimately have to compromise on some issues.

If the UK were to opt for a customs arrangement with the EU, it would “at least need to have the UK in the room for future deals with third countries”, he said.

“We would need to consult them about UK interests, because if we were to completely ignore the UK and hope they would accept everything that came from an FTA, it would not work very well.”

The Dane, who was at the forefront of work to ban EU imports of US chlorinated chicken in 1997 and is now a partner at Brussels-based trade consultancy Trade Up, suggested creating alignment through a “common veterinary area” between the UK and EU could be one way of continuing access for UK food exports in the event of a no deal.

This would be similar to existing arrangements between the EU and Switzerland, but would need to see bodies such as the FSA continue to work closely with its EU counterpart the European Food Safety Authority.

“It’s a model that could be inspirational for the UK, so that you can at least obtain a certain degree of independence in terms of legislation and standards, but not to the extent that new trade barriers are created and mean we have to stop products going back and forth.”

It comes amid renewed scrutiny of US production standards, after a Channel 4 dispatches investigation this week uncovered a series of alleged hygiene breaches at a Texas poultry factory owned by US meat giant Tyson Foods.

A Tyson spokesman said the video was “out of context”, with much of the filming taken during break time or at the beginning of a sanitation shift. “The video is not reflective of processing at this or any Tyson Foods facility,” he added.