Britain's Biggest Alcohol Brands 2017: the battle for the booze aisles 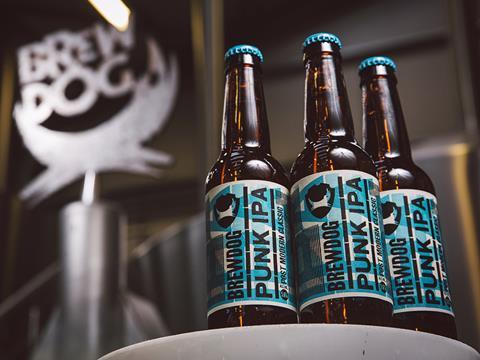 BrewDog has become the first craft brand to appear in The Grocer’s ranking of Britain’s 100 Biggest Alcohol Brands.

The anarchic Scottish brewer has overtaken established brands such as Jägermeister, Southern Comfort, Amstel and Cobra, with sales up 170.5% (£24m) to £38.6m, to join The Grocer’s exclusive ranking in 65th place [Nielsen 52 w/e 22 April 2017].

Its storming success follows a year of major BWS range revamps by the mults, which saw mainstream brands lose space to trendier craft products, with BrewDog at the vanguard. Over 81,000hl of BrewDog’s beer were sold in the off-trade this year, up 166.6% on 2016.

The range revamps had been “some of the most exciting we have seen in beer” said BrewDog head of UK sales Steve Ricketts. “This has not only had a positive effect on our business but the whole craft industry.”

Growth was driven by “great availability and distribution, and more people coming back to buy more great-tasting craft beer,” he added. “We have seen fantastic consumer and shopper engagement for our new mixed can packs and larger Punk IPA multipacks.”

BrewDog is now ramping up chilled storage and distribution across its business, and pushing retailers to introduce chilled fixtures for craft beer storage, according to Ricketts. “This is a real focus for us in terms of retailer and customer education to communicate what chilling beer really means for the experience when you drink it.”

It has also moved into more traditional advertising methods, having previously shunned billboards and print ads in favour of social media and viral marketing. Its I Am Punk campaign rolled out across digital billboards in major cities in May.

While BrewDog was the only craft brand to enter the top 100 this year, other brands across the craft sector - including spirits - also made considerable gains. The combined value of the subcategory’s top 30 brands now totals £141m, up 42.5% on 2016.

Sales of indie rum brand The Kraken are up 31% to £10m, while Guinness’ craft brand Hop House 13 registered £6.7m in sales, up 39.7% on last year. Brooklyn Brewery, Goose Island, Innis & Gunn and Lagunitas all increased in value.

To read more, become a Gold member of The Grocer today

Britain's Biggest Alcohol Brands 2017: the battle for the booze aisles