Are French-style farmer protests about to hit the UK? 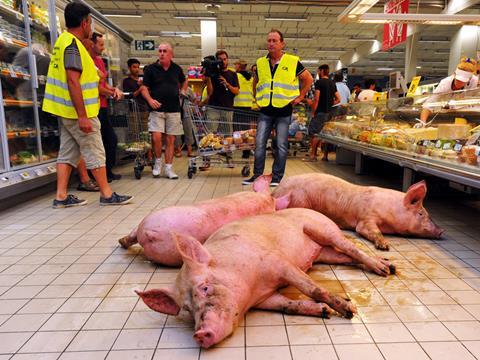 French farmers - angry at falling food prices and cheap foreign competition - have taken to the streets in protest over the past week. They’ve staged border blockades to halt food imports from Germany and Spain; unleashed live pigs in supermarkets; caused chaos by blocking motorways with shopping trolleys and tyre barricades; and dumped farm waste at food manufacturing plants.

Such actions are extreme but they have yielded results (see box) - and the French example is now increasingly capturing the imagination of dairy and livestock farmers in this country, who are themselves unhappy with prices and the support they get from big UK processors and retailers.

When Arla announced on 24 July it was cutting its milk price again, about 40 farmers embarked on a go-slow on the A50 - bringing traffic to a standstill.

Meanwhile, lamb producers are looking to orchestrate a campaign under the slogan ‘No Lamb Week’ next week, which will see farmers withold supplies of British lamb to the mults for a week.

So is this just the beginning? Are we facing a wave of French-style protests in the weeks ahead? And what role should government play in calming tempers and providing relief? 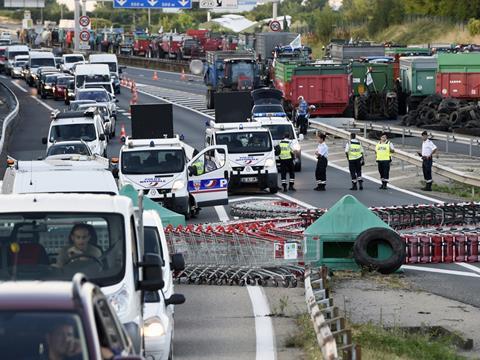 Following a wave of protests, the French government has proposed a €600m aid package to placate its farmers. It consists of 24 separate measures for cattle, pork and dairy farmers, including tax exemptions and payment deferrals, cash to help farmers restructure their debts, and access to a €500m loan fund via BPI France, the nation’s public investment bank.

Proposals also include a pledge to improve the promotion of French meat to consumers, and more focus on exports, while French agriculture minister Stéphane Le Foll has pledged the government will convene a crisis meeting with the food industry on 7 September.

However, the aid package has been met with scepticism from farming unions. “None of them deal with the distortion of competition with farmers from other countries,” says Franck Sander, a spokesman for the powerful FNSEA.

Disputes over low prices and cheaper imports are part and parcel of farmer relations in all sectors, but there’s no question dairy and lamb producers are facing particular difficulties in the face of plummeting profitability at the moment.

In dairy, average farmgate milk prices have dropped from 32.36ppl to 24.09ppl [AHDB Dairy] over the past 12 months (although some claim the current average is even lower than 24.09ppl) and more than 450 dairy farmers have left the industry over that period.

Meanwhile, lamb producers say they have been left high and dry by retailers not doing enough to promote British over cheap New Zealand lamb and keeping in-store prices high when farmgate prices are down.

NFU dairy board chairman Rob Harrison says the UK government must now step in and offer farmers similar support to that offered in France. He also calls for retailers and consumers to buy more UK dairy lines.

“We desperately need the government’s help to ensure a fully functioning and fair dairy supply chain,” he says - a call echoed by EU farming body Copa-Cogeca, which warned this week of a “catastrophic situation” in European agriculture without direct intervention by the EU and member states.

In response, Defra says it is “backing British farmers to grow and sell more by liberating them from red tape” and rolling out a fairer tax system for them. But in terms of hard cash pledges, it looks like the farming sector will have to look elsewhere - and some farmers will conclude disruption is the only option they have left.

Indeed, there appears to be a growing groundswell in favour of protest action. The Tenant Farmers Association (TFA) put its head above the parapet this week by warning it was in “close communication” with Farmers for Action and other industry bodies and “would not hesitate to support protests when the time is right”.

Even Meurig Raymond, president of the usually more conservative NFU, said on Tuesday (28 July) he “supports protests that have a proper target and a clear objective”.

With this in mind, all eyes are on David Handley’s Farmers for Action, which, along with the NFU and others, was at the heart of the #SOSDairy protests back in 2012.

Last week, Handley warned dairy farmers were once again considering “peaceful direct action” if the situation around prices does not improve, though he has since been keen to distance himself from the go-slow staged on the A50 - surprising to some, given the FFA’s reputation for militancy. Instead, Handley has called for calm from those looking to copy French tactics of “blocking motorways, spreading slurry and burning tyres” by warning “it may make you feel better but it does not put a penny in your bank account”.

Lamb producers are also relatively muted in their rhetoric about direct action, notwithstanding the fledgling plans around ‘No Lamb Week’.

National Sheep Association CEO Phil Stocker insists the NSA “does not engage in militant action” but warns it would be “no surprise” that some UK producers are calling for French-style action in light of poor retailer support for UK lamb.

Perhaps the more concerning issue for the lamb sector, suggests Stocker, is the “worrying air of resignation” among the “silent majority” of farmers, with some planning changes in lambing next year that could have an impact on retailers’ ability to source British lamb in the future.

While many farmers and farming organisations agree direct action of some description is likely - even if French-style protests aren’t - there is less agreement on what role the UK government should play in providing assistance.

Harrison is clear he believes Defra should be following the example of the French government, but others worry this will send the wrong message.

Although Stocker agrees with Harrison on the need to “get the market going”, he thinks financial intervention could be counterproductive.

“I think this is something we could struggle to achieve given the current climate,” he says, adding much of the blame for the current struggles of UK lamb producers lies squarely at the feet of retailers.

Handley warns any rescue package would simply send farmers into more debt, and notes what farmers need is “money for our products that enables us to stand on our own feet and pay our own debt”.

Other sectors beyond dairy and lamb are also sceptical. “The government has no money so I don’t see any point in protesting,” says Zoe Davies, CEO of the National Pig Association. Instead of hoping for support from the public purse, the NPA has been focused on “developing relationships with retailers to secure longer contracts”.

Indeed, this is an approach many hope will bring about lasting change, with the outcome of Tesco’s review of its TSDG dairy group later this year seen as a key indicator of where farmer/retailer relations are headed in the future.

In the meantime, protests will remain on the cards if farmgate cuts continue - albeit likely with a more reserved, British tone than those seen across the Channel.